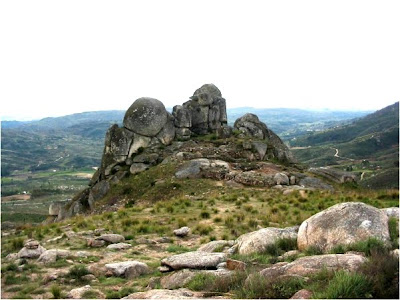 The sites corresponds to a spectacular granitic tor that rises, rather strikingly and to a considerable height (750 m of altitude), near the summit of the right slope of Muxagata stream (a tributary of Mondego River). It has a magnificent view over the valley and it is a remarkable land mark.
Two small enclosures were built attached to the tor, using stone walls of 3 meters wide. Traces of human occupation were detected outside, in the top of the slope.
The site has been systematically excavated, revealing the absence of domestic occupation inside. On the contrary, the exceptional assemblage of finds (bell beakers, anthropomorphic figurine, personal ornaments, rock painting), and the rarity of other daily artefacts (such as lithic material or loom weights), suggest that the site had no residential function. Its topography, lower than the top of the slope, clearly make it defensively inefficient. In fact, it looks more like a stage. 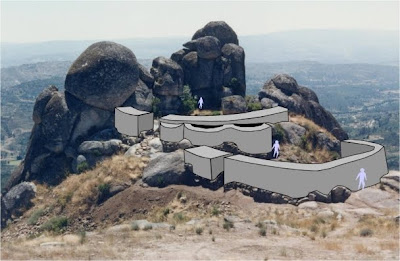 Due to its location, Fraga da Pena would have played a significant role in the organization of local landscape over several successive historical periods (as it still does). Its occupation reflects a strategy that sought to exploit both the symbolic and communication potential of the tor. But the wall enclosures shouldn’t be regarded simply as an appending of a structure to a natural rock, but rather as a unified building, where both artificial and natural features were combined and interdependent in generating a place that serve as a stage for certain specific social practices.
Those social practices might be related to a narrow passage in the middle of the tor, connecting the interior of the first enclosure with the other side of the tor, to a natural balcony over a steep scarp. This passage is naturally (?) aligned with East – West axis, so when the sun rises behind the other slope of the valley, light comes through the passages, hitting part of the first enclosure that is in the tor’s shadow. A clear expression of a traditional Neolithic ideological use of landscape and natural elements.

It is a magnificent exemplar of the architecture of the period, combining in meaningful building natural and artificial elements, used to communicate and organize the landscape in the context of social identity fabrics.
Is part of a local archaeological route and its archaeological materials are exhibit in a local museum.
Publicada por A.C.Valera em 10:46 PM