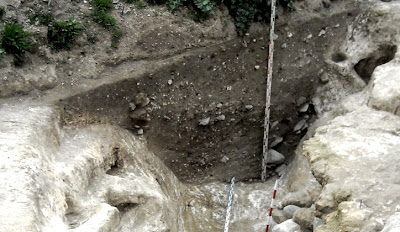 As I’ve said before, we completed this year a cross section in Ditch 6 of Perdigões, dated from Late Neolithic. This, combined with the plan obtain by geophysics, allows us to estimate the volume of bedrock extracted. Assuming similar shape and measures (sometimes they change along the ditches) of Ditch 6, that has almost a two hundred meters perimeter, the building process implied the excavation and removing of about 745 m3 of geological material (I will also calculate the weight).

I will deal later with the questions of logistics, labour and technical problems. For now I just renew the question: where is it?

Traditionally is assumed, I repeat assumed, that bank walls were built with that material, later eroded. The problem is that there are no evidences of that erosion in any of the already surveyed ditches at Perdigões (as in other Portuguese enclosures). They simply are filled with different materials (with exceptions for small erosion of ditch walls, as we can observe in a specific point of Ditch 6).

But the geological is also not outside the ditches, not even in Perdigões, that is topographically an amphitheatre, with the pendent orientated to the inside and East. Ditch 6 is in the centre of the natural amphitheatre. If there was a bank by the inside of the ditch built with the geological material there should be evidences of it. There are not.

If we think that at Perdigões are at least 11 ditches, progressively bigger than Ditch 6, we start to have an idea of the quantity of geological material removed there over time. Thousands of cubic meters; thousands of tons (it is now possible to also estimate the volumes for ditches 1, 3 and 4).