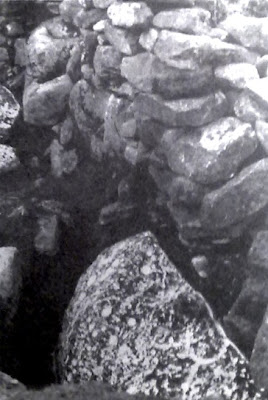 Rock 6 and Chalcolithic tower above it (after Gomes, 1991)

The excavations in the walled enclosure of Escoural, located over the formation where the famous cave with Paleolithic art and Late Neolithic funerary use is, detected a wall and a tower and two phases of occupation dated from the first half of the 3rd millennium BC.

The interesting thing is that the wall and the tower were built over carved rocks with Late Neolithic “bucrânios” (representation of ox heads and horns) and a (debated) representation of a wheel car. This was considered a sanctuary and the construction of the walled enclosure was seen as a deliberated act of destruction of the previous site and of its meaning and social role. As the author puts it, the situation represents “a confrontation of two socio economic and religious conceptions”, or in another words, a confrontation between semi-nomad shepherds and sedentary farmers.

At the time, ditched enclosures were practically unknown, and for Late Neolithic no “heavy” architectures were known besides the megalithic ones. So, walled enclosures were seen as an indicator of a new social system, based on agriculture. For some, it would have its origins in internal social dynamics, for others it would have been a result of diffusion. In both conceptions, the transition from Late Neolithic to Chalcolithic was seen as an important historical milestone of periodization, a frontier between two different social systems and historical periods.

Escoural walled enclosure was used as an evidence for this perspective.

Today, we know of large architectonic investments in building ditched enclosures in the Late Neolithic (Porto Torrão, Perdigões, Juromenha 1, Ficalho, Torrão, Águas Frias, Malhada das Mimosas, Ponte da Azambuja). More than that, some of those enclosures grow bigger and continued throughout the chalcolithic, during the 3rd millennium, and became large ditched enclosures (Perdigões or Porto Torrão). Some are related to megalithic cromlechs and to funerary practices and present symbolic items that, in the overall picture, clearly reveal continuity and not rupture.

On the contrary, this can be seen in all subsystems. And as to the world views, the recent research of the symbolic foundations of some ditched enclosures suggests that the same general Neolithic cosmological system is framing chaolcolithic communities. In other words, Chalcolithic (at least untill the middle of the 3rd millennium) is the real Late Neolithic.
Publicada por A.C.Valera em 10:53 PM