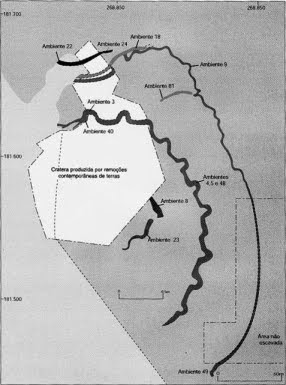 Águas Frias is an interesting enclosure excavated during the rescue program of Alqueva dam, but still to be fully published. Is located in the valley of the Lucefecit river, a tributary of the Guadiana.

It presents in the left bank of the river three apparently concentric ditched enclosures, designed by wavy ditches with “V” profiles, being the middle one more regular in plan than the others and presenting the outside one a complex sequence of negative elongated structures in the north part. Based on its archaeological material the site was dated from Late Neolithic (second half of the 4th millennium BC).

Because the archaeological intervention was done when the dam was already flooding, the Lucefecit was then much larger and it was impossible to know if the ditches go through the river to the other side and the enclosures would be crossed by the water stream, as it happen in other cases (Porto Torrão, in Portugal; Pijotilla in Spain).

Nevertheless, the site was interpreted as a village and the ditches as defensive structures associated to palisades which ended in the water borders, creating an image of a semi circular settlement. 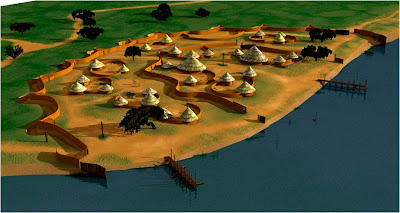 An interesting aspect, yet to be explained, is the way in which one of the ditches ends, presenting the extremity in a ramp filled with a stone pavement.