In the context of rescue archaeology related to the Edia´s water supply infrastructures it was discovered and surveyed the ditched enclosure of Fareleira 3, implanted in the Southeast edge of a broad plane surrounded by water, good soils and privileged view.

The archaeological context included a wide range of negative structures, excavated in the soft local bed rock consistent with an habitation context: with a great variety of pits and one shack basis, all with circular shapes, and what it appears to be a delimitation ditch, or more correctly 4 segments/modules of the same ditch in clear association with different kinds of post holes. 256- general view of the ditches

Spread over a visible area of around 0,5ha these structures were divided into two different areas and acted like two different and well assumed spaces: the first one delimited by the ditch, with a major concentration of pits and post holes. The second one, with a much more dispersed pattern, and exclusively formed by pits, concentrated in the opposite limit of the site. The very distinctive process of the different fillings in these structures amongst the two groups was itself very meaningful. It showed a much more complex filling, with constant re-cuttings of the preceding layers and with more ample sequence of deposits, joined with a generous quantity of material: ceramic, lithic, faunal remains and large depositions of stones; over the singled filing (very similar to the geologic cut-off during the opening of the pits), with none or very few elements allowing for reasonable dating.

The profusion of pottery, especially in the interior of those ditches, is essential when framing this enclosure in the last quarter of the IV millennium, with a consistency inherent to all layers. This means that in spite of the different phases of occupation and final abandon, the time line was very short, with no serious alterations in what we may call the way of living.

Although no general plan is available we have almost 40 meter of a circular alignment of 4 short ditches merged with 4 post-holes. These ditches are different in depth, filling and width. The shorter ones (South limit) – [2513], [2402] e [2404] – presuppose a “boomerang shape plan” with similar sizes (5.50m long per 1.80m wide). While the isolated structure on the North limit – [2304] – longer and thinner than the rest (12.5m long per 1m wide) is more sinuously waved. All of them are “U” shaped structures with straight walls and depths that go from 0.46 to 1.30 meters. 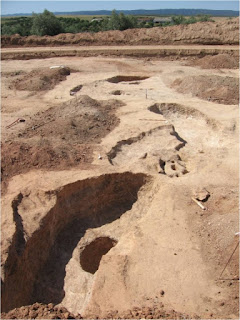 It looks like being the work of two different contractors: the first three interrelated segments on the south end represent a one stage building process with the excavation of the two contiguous segments overlapped by a third one working has a clinch between them, assisted by a multiple post-hole structure. The isolated ditch has nothing to do with this complex building system, but maybe that is because it corresponds to an in-between gate module. 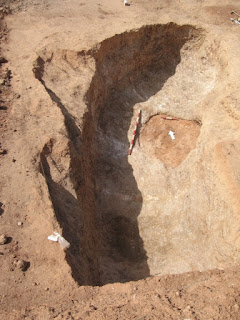 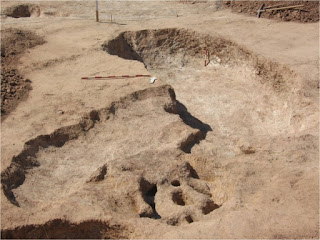 There were diagnosed two empty spaces in this line of ditches, which can be looked at from two perspectives: either they represent entrances or they indicate an unfinished work. In spite of our belief in a building staged process, it is more likely that those ditches represent deliberate gates. Both are located in the eastern side of the enclosure, a common feature to most of the enclosures spread all over the Alentejo. This fact has been studied and interpreted as a cosmological constraint, the symbolic facing to the winter solstice (Valera e Beckett, 2011). 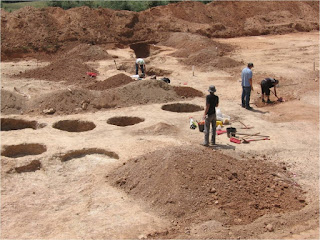 All these descriptions look familiar, but what do they actually tell us when it comes to their functionality and meanings? We hope that with a thorough study of the materials and a broader view of the site we can get some more answers and associate them with some other similar negative structures.