0256 - The origin of walled enclosures in Alentejo 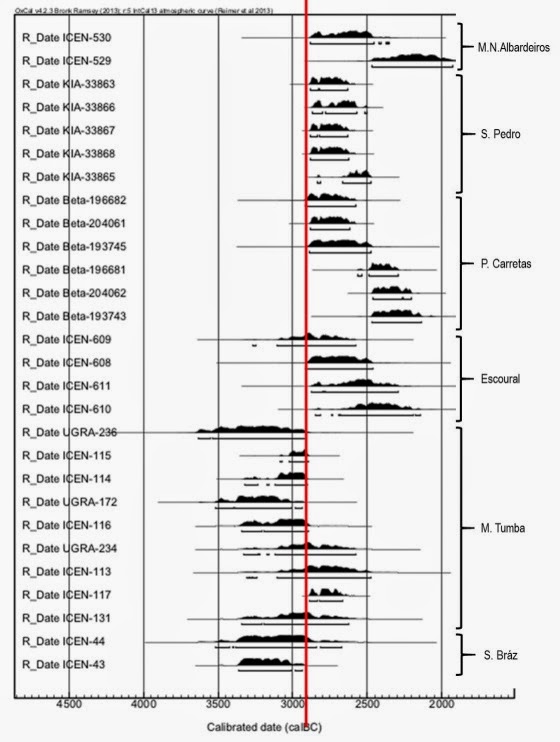 
For some time the origin of walled enclosures in Alentejo was thought to have occurred in the second half of the 4th millennium BC. The radiocarbon dates from two sites seem to indicate so: the chronologies from Monte da Tumba (Silva e Sores, 1987) and São Brás (Parreira, 1983).

These old dates, thought, were obtained over charcoal and they have a large standard deviation and in face of another set of dates, some of them more recent and obtained over bone, the actual image on the issue has changed.

The dates from Escoural (Gomes, 1991) walled enclosure, from Monte Novo dos Albardeiros (Gonçalves, 1988/89) and more recently from São Pedro (Mataloto, 2010) and  Porto das Carretas (Soares e Silva, 2010) indicate that these architectures emerge in the beginning of the 3rd millennium BC, namely after 2900 BC. This is coincident with the limit that radiocarbon establishes between Late Neolithic and Chalcolithic contexts in ditched enclosures (Valera, 2013a). Furthermore, the chronology available for the Late Neolithic hypogea of Sobreira de Cima (Valera, 2013b) and for the funerary context of Gruta do Escoural (Araújo e Lejeune, 1995), clearly in the second half of the 4th, corroborates this argument. In fact, it is not credible that these funerary contexts, with their unquestionable Neolithic assemblages, could be contemporaneous of early Chalcolithic walled enclosures, with a completely different material assemblage and just a few miles away.

The old dates should be abandoned in the debate of the origin of the walled enclosures in Alentejo. They clearly are a phenomena of the beginning of the 3rd millennium BC. And an ephemeral one, since the majority of the dated ones seem to end around the middle of the millennium (the recent dates of Porto das Carretas correspond to a phase where the enclosure was already deactivated and the one from M.N. dos Albardeiros from a possible reutilization). Several are reoccupied in Beaker times, but not as enclosures, like Porto das Carretas or Mnte do Tosco (Valera, 2000).

In the long time span of ditched enclosures, walled enclosures could have been just a temporary adding to the architectures of the societies that lived in the region.

This is an argument that I am developing in a paper that is almost ready.
Publicada por A.C.Valera em 10:22 PM