Borralhos ditched enclosure was detected in Google satellite images in the context of the research developed by NIA-ERA (the research unit of ERA Arqueologia SA) regarding the prehistoric ditched enclosures in South Portugal. In that same research context geophysics was done. The Nia-Era team, with Taigo do Pereiro, António Valera and Ana Catarina Basílio, did the geophysics of the site with a fantastic result. The magnetogram was first published here and was also presented at the last Iberian Southwest Archaeology  Meeting (held in Zafra, 2018). Its detailed description and archaeological interpretation will be published soon. But this is one more fantastic image of a fantastic enclosure, resulting from personal and institutional commitments that, with a scientific agenda, are simultaneously trying to save this kind of  heritage that is threatened by the savage agricultural practices that are transforming (razing?) Alentejo landscapes.
There is some irony here. Agriculture was related to their origins and agriculture is now related to their destruction. Hopefully, this one will be saved. But apart from that, the image is already material for research, being used by the team to question some specifics of the Prehistoric ditched enclosures of the Guadiana basin in coming talks and publications.. 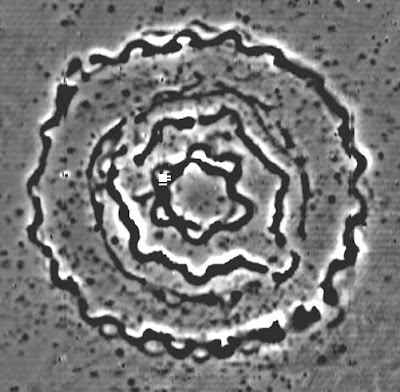 Part of the magnetogram of Borralhos, done by the NIA-Era team.
Publicada por A.C.Valera em 11:26 PM