At the bottom of the stratigraphic sequence, a layer with scattered stones, fireplaces, pottery and microlithic materials revealed (in the top) an alignment of post holes (possibly from another orthogonal structure). Decorated pottery is present, including this “cardial” decorated shard. 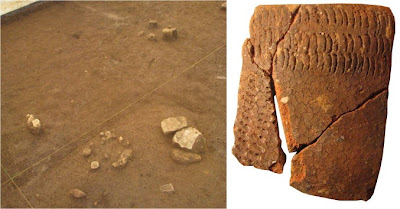 This level is cut by a small ditch that has a structured gate facing East. This ditch is, in terms of the stratigraphic sequence, from the same phase of the sub rectangular house detected earlier. 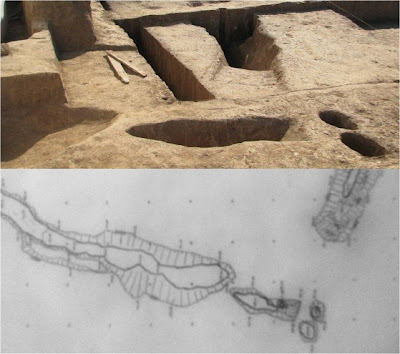 These two moments correspond to the earliest occupations of the site that can be addressed generally to the early and transition to the middle Neolithic. But the occupation is incredibly long (even if not continuous).
Publicada por A.C.Valera em 9:54 PM No comments:

0081 - Neolithic ditches and the dynamics of growth 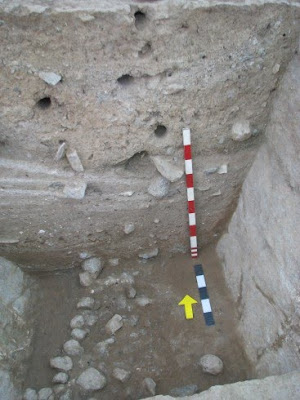 Perdigões inside ditched has just been dated by C14, as well as some related structures (such as a small ditch of a possible palisade and a latter occupation of a hypogeum type pit).
A lower layer inside de ditch (Ditch 6) was dated from 3330-3020, the small ditch from 3340-3020 and the top of the hypogeum pit from 3090-2910 (dates calibrated and at two sigma interval – still not published). Material culture is generally the same inside these structures and is perfectly consistent with what we know about the period.

The inside enclosure of Perdigões is, therefore, contemporaneous of other Late Neolithic ditched enclosures, such as Juromenha 1(four dates between 3370-2920 – Mataloto & Boaventura, 2009) or Ficalho (with a date from 3500-3020 – Soares, 1996) or others not yet dated sites.

But one interesting question emerge from this situation: why deed Perdigões enclosures kept growing with the built of new and larger enclosures during the third millennium, reaching a 500m diameter and presenting huge negative structures, and why the other Neolithic enclosures didn´t.

My answer has to do with the symbolic role that Perdigões assumed since the beginning. A role that is not so clear in other Neolithic sites. In fact, some enclosures seem to express architectonically (their design, topographical location and landscape connections) and in terms of the ritualized practices that were present inside (namely the funerary practices) a status that may be responsible for the historical role they played and the dimensions they achieved. They are basically expressing Neolithic world views and their gigantic size (by the time standards) at the end of the 3rd millennium may very well be interpreted as the singing of the swan of Neolithic Cosmologies.

Just like in other historical dynamics, the growth of some highly symbolic and socially meaningful sites may be what conditioned the development of others. The answers for this kind of questions must be searched at a regional scale and not at a site one.

The meeting is taking place tomorrow at the University of Coimbra. See here.
Publicada por A.C.Valera em 7:07 PM No comments:

The questions raised by ditched and walled enclosures have been frequently at the heart of several debates regarding Peninsular Recent Prehistory communities.

Amongst the numerous issues discussed, one has emerged with particular relevance: the direct relation between enclosures and funerary practices. These relations, in some cases, go as far as to question the very notion of necropolis as a separated space for the dead and present similar situations that have been address with different approaches, generating different answers.

Because the last years have provided, in Iberia, important information regarding these contexts and their connection with funerary practices, and because Perdigões enclosure became an anchor project in this matter, the ERA Arqueologia decided to promote an international meeting to debate this issue.

Being a European phenomenon, we understand that the approach to the peninsular data must be framed and confronted with the information available to other European regions, aiming to encourage debate at different scales and from different contexts, experiences and theoretical backgrounds. Therefore, the meeting will assemble a group of researchers with provenance in several European countries where this topic has particularly importance. 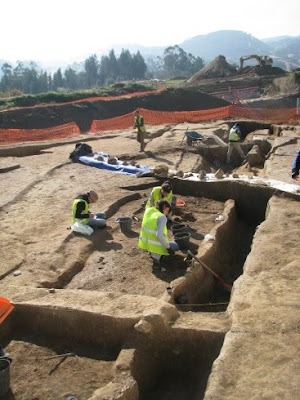 This association is frequently assumed for ditched enclosures, but is rarely demonstrated. In what concerns Portuguese enclosures, we have some short notice on a possible inside palisade in Juromenha Neolithic ditched enclosure and we have the images of the inner enclosure of Perdigões (see here) and of some of the lines of Moreiros (see here) that suggest the existence of palisades. But, for the majority of sites already excavated or prospected by geophysical methods, that evidence is missing and the available data does not allow generalised positive statements about the association of palisades to ditches (and even less of earth banks).
Nevertheless, some sites do suggest that association. One of those sites is Senhora da Alegria, where a larger ditch seems to be associated to a smaller one that runs in parallel, and could be an infrastructure to support a palisade. This is not clear yet, for sometimes the smaller ditch seems to slightly overcome the bigger one, but that could be related to readjustments in time and the hypothesis remains.
Those structures are from a Late Neolithic and generally contemporaneous of the others ditched enclosures that also suggest, as referred above, the presence of palisades. But the Chalcolithic ones do not present the same evidence. Has this association a chronological significance? A question to have in mind.
Publicada por A.C.Valera em 12:04 AM No comments: 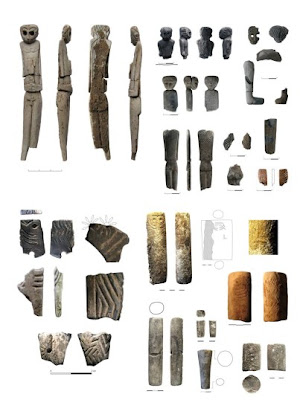 This will be a topic for a conference in the next ERA annual meeting that will take place in Lisbon in March 10th.

Perdigões present a great variety of artefacts that are usually interpreted as “Idols” (an issue to be discussed), made in different external raw materials (like ivory, limestone or schist). It is interesting to notice that are very few made in ceramic when compared with other raw materials, which seems to suggest a strong relation between raw material and object meaning and value.
Another interesting aspect is that, if almost all the “idols” appear in funerary contexts, some are present inside ditches and certain types appear (so far) in specific funerary contexts, even when they are contemporaneous with other burial structures.
These issues and others will be presented and debated at the meeting.
Publicada por A.C.Valera em 8:50 AM No comments: 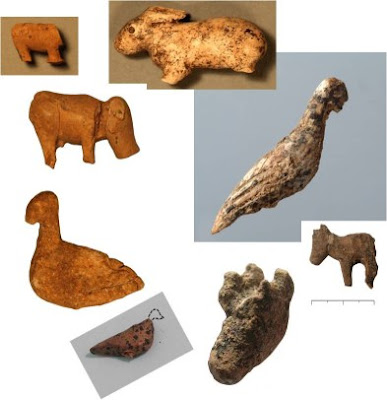 A paper is in press about the ivory animal figurines at Perdigões enclosure. These are very small sculptures of several animals (ox, deer, birds, rabbit and a possible pig) that have between 1 and 2 cm.

If one of them might be attached to a larger artefact, the others seem to be independent objects.
Why are they so small?
Why, in a period of schematic art, are they so realistic?

They resemble the small animal figurines of Dorset culture (Arctic hunters and gatherers) and its animistic context of function and meaning described by Tim Ingold. Could a similar line of inquiry share some light over the Perdigões ones?

I do believe animistic thought and its world views are an indispensable approach to understand much of the problems that we are confronted with at Perdigões set of enclosures.
Publicada por A.C.Valera em 8:44 AM 2 comments: