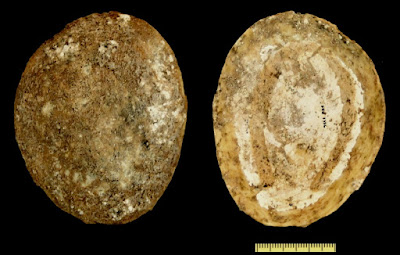 
The Portuguese large Prehistoric enclosures present many differences regarding the smaller ones: apart from size, they have longer and more complex biographies, evidences of a multitude of social practices (including manipulation of human and animal remains and funerary practices) and show that they were engaged in large interregional networks of circulation of people, animals and exotic goods.

Perdigões is a good example of this large scale interaction developing from the second half of the 4th millennium BC and increasing during the 3rd. A paper addressing the exogenous at Perdigoes is about to get published, but another is being written specifically about one item: the shells. A significant number are shells from salty water molluscs, with probable provenance in the coast of Alentejo and the estuaries of the Tagus and Sado rivers.

Though, this shell of Patella candei, with 8,4x6,7cm, is not from those areas. This species is from warmer waters of Madeira and Canarias islands and the coast of Magreb. Like the ivory already analysed, its origin is probably in Northwest of Africa, documenting that at Perdigões enclosure exogenous items of extra peninsular origin were arrinving.

PS – Last week we just found out that there is also Amber at Perdigões, reinforcing this picture.
Publicada por A.C.Valera em 3:27 PM No comments: 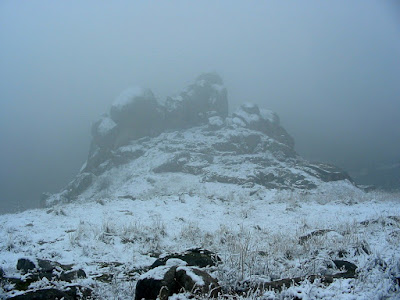