A new ditched enclosure was detected just 200m north of the ditched enclosure of Xancra, in Alentejo, South Portugal. The identification was done in an aerial image from 2020 provided by Google Earth. Surface materials indicate a Copper Age chronology, jut like Xancra. The proximity is food for thought, and might corroborate the idea that many of these ditched enclosures had short lives and intermittent ones, implicating lateral displacements or overlapping construction of enclosures, which has been documented on several occasions. Work developed by the NIA-Era Arqueologia (A. Valera and T. do Pereiro). 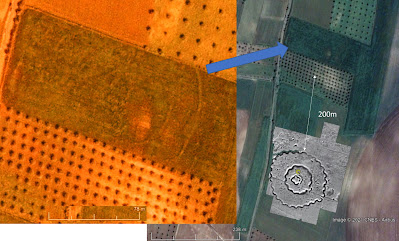