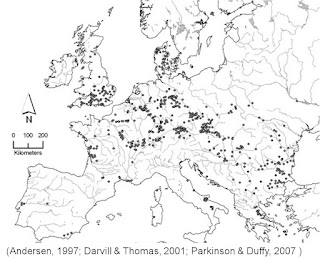 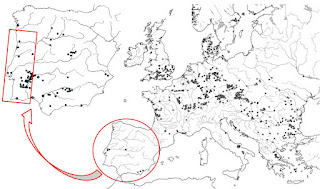 Everything means something; usually more than just one thing. Archaeological maps are no different.
The first map presents a distribution of enclosures in Europe. That map has been published several times by several authors for a long period of time. In that map Iberia is almost a desert and that has at least two readings.
Both are expressed by the second map. Iberia has also a lot of enclosures, not just walled, but also ditched. This is a result of recent work that is demonstrating that Iberia is participating of the structural trends of Recent Prehistoric Europe (I wonder why is there some surprise). But what these maps also show is the low level of internationalization of Portuguese archaeology. If there isn’t a significant effort of European researchers to get acquaintance whit Portuguese archaeology (and language doesn’t explain it all), it is also true that Portuguese archaeology has lower levels of internationalization (and language is still not an excuse). New data is available for some time now and it is not reflect in recent international publications.
So what do those maps really express? The desert on Portugal ravels, in a way, the recent nature of the developments of Portuguese Archaeology (the recent discovery of several ditched and walled enclosures) but also reflects its traditional poor conditions for international relationships and circulation of information.
So those distribution maps need a careful hermeneutic approach. As usually happens whit any kind of statement.
Publicada por A.C.Valera em 8:01 PM No comments: 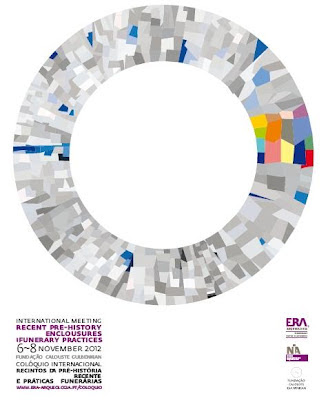 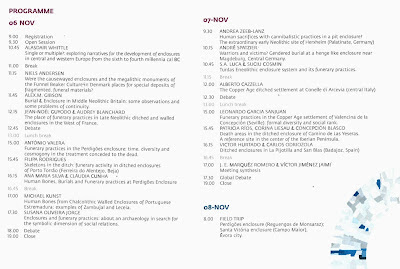 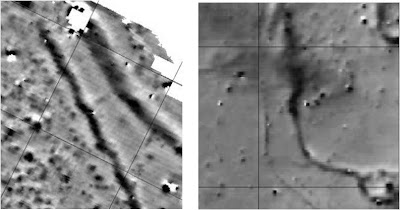 Parts of the magnetograms obtained by Helmut Becker for Perdigões and Moreiros 2, showing alignments of post holes from possible palisades and (in the case of Moreiros) of a timber circular structure.

This is a material that has been underestimated in the Iberian archaeology of Prehistoric architecture. The reason is certainly related to the poor preservation of timber evidences, but also to axiomatic postures. We are too much preset to stone building and to forget wood.

The recent projects on the geophysics of ditched enclosures (at Perdigões by Málaga University and NIA-ERA, and in several others sites by NIA-ERA in a project directed by me, all having Helmut Becker as geophysicist) has suggested other ways: wood must have been much more important in building positive structures. There is even a possible wood circle in Serpa area (in print), that might bring to Iberia a type of Neolithic constructions not yet documented.

But the main problem is that Portuguese archaeologists (or should I say Iberian archaeologists) are not trained to recognize the remains of wooden constructions. I mean post holes.

Ho yes, we have a lot of small post holes, of 10, 15 centimetres diameter. Those we have and the huts imagined with them. But large timber structures are missing, though geophysics shows it differently.

In fact, there are many pits in many places traditionally and axiomatically interpreted as “silos”, or reused “silos”, that don’t have (or almost don’t have) anything inside but sediments and some stones. But many of those pits might be large post holes, of trunk posts, like the ones shown in Helmut’s geophysical images. The problem is that the majority of archaeological interventions are spatially restricted, and what might be a sequence of post holes becomes one or one and a half “silos”.

Architectures with large timber trunks must start to be considered in Iberia. There is now enough evidence to suggest that those constructions might have had a significant importance, far more than recognize by traditional discourse.

But, naturally, with this recognition new problems arise. If we are talking of post that are tree trunks we must start asking what kind of trees we have here that might provide long strait trunks for those constructions. South Iberia, even then, was not central Europe or North Europe. Vegetation was different. So, what kind of tree could be use for large timber structures using tree trunks? A question that was not asked yet to the people that studies paleo flora.

A new inquiry is in the agenda.
Publicada por A.C.Valera em 10:08 PM 2 comments: 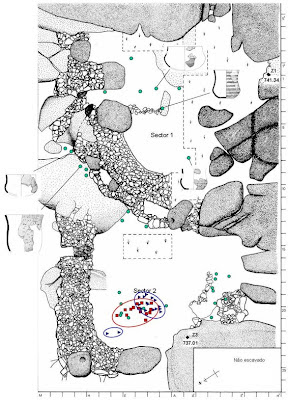 Fraga da Pena is the site where the largest number of beaker pots was recorded in central-north Portugal. But the most interesting thing is the distribution of beaker shards inside the two walled enclosures: concentration of shards from several half pots in the middle of the outside enclosure; the distribution of beaker shards along the path that leads to the inside enclosure and a deposition of a complete exemplar of the few International style beakers at the end of a stone alignment in the sequence of the gate.

The general appearance of Fraga da Pena, without evidences of inside domestic structures or contexts, already suggested a particular symbolic social role for the site and for the activities that were developed there. But the spatial distribution of the beaker remains inside reinforces that discourse.

Here we have large walls (more that 3 meters wide) that enclose very small areas where no domestic remains were detected. On the contrary, exceptional material is present and dominates the archaeological assemblages. The monumental natural tor and the relations to local landscape complete the image of a special place for special practices. Beaker pottery seems to have played also an important role in those practices.