Here are some of the new possible prehistoric enclosures recently identified in Google Earth. These ones are from Beja district. (work of Tiago do Pereiro and mine). 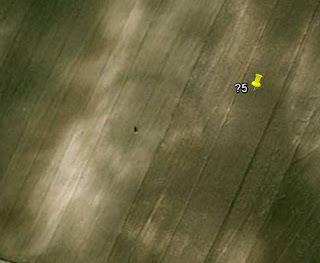 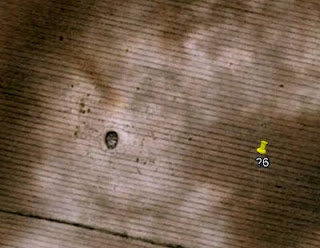 0128 - Many new enclosures in South Portugal

South Portugal is, definitely, becoming full of ditched enclosures. Every week seems to be discovered a new one in Google Earth, as it recently happened with Salvada. Well, my search for enclosures seems to have affected my colleague Tiago do Pereiro that came to me with several possible enclosures. Together we have now about 30 new possible (quite possible) ditched enclosures to be confirmed in Alentejo region, adding to the 40 already known.


This weekend, passing by one of them (one of Tiago’s Google finds), we were able to confirm it is a Prehistoric enclosure, for there is a lot of pottery and stone tools at the surface.


It is now time for a specific project that allows the adequate confirmation of those images that we already have and the ones will have in the near future, for we are getting a lot of experience in recognize this particular signs in areal and satellite images.


Here is the new one, that seems to be spectacular, in Évora district. 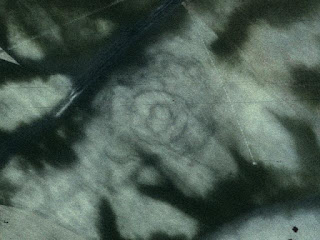 This is the way the outside ditch of Bela Vista 5 was done. Not at once, but by a sequence of short ditches, that were overlapped and are different in depth and thickness, as we can see from the different profiles obtained in several areas (an image from the archaeological report in preparation) and from the distribution of stone concentration in the surface of the sequence.


In some of them we can see evidences of re-cutting. 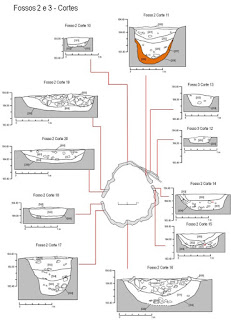 Naturally this delimitation has no functionality for defence or water circulation or other more practical goal. The sections were made to be filled (and some were filled before the next section was opened). And they are filled with stones and pottery shards: no faunal or human remains, no stone tools, no loom waits were recovered in the surveyed areas of this “ditch”. Just pottery, showing a clear selection of a particular category of material.


Faunal remains appear in some of the inside pits. The inside small ditch, on the contrary has some faunal remains associated to the pottery shards, and enclosures an area with just a pit grave. All the data from this enclosure points to a place of highly ritualized practices.


After the report is complete we intend to publish a monographic paper on this important site.
Publicada por A.C.Valera em 12:49 PM No comments:

0126 - Looking for enclosures on Google

It has been a quite successful practice. Xancra, Monte do Olival 1 and Salvada were detected in Google Earth. I believe others will be in the near future and others could have been, if areal images were carefully analysed as routine.


This is the example of Perdigões. In this image of the early nineties, the olive trees were not yet removed, the ploughing for the vineyards was not yet done and the spectacular areal image that revealed Perdigões set of enclosures was not yet taken. But the ploughing could have been avoided if this picture, available in the net, was carefully studied: part of the two outside ditches are perfectly visible in the south side of the site, near the road. 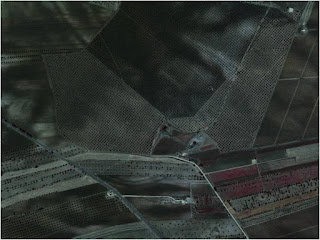 Of course, Google didn’t exist then and large projects of agriculture were not submitted to impact studies.


Another example is Outeiro Alto. This site is now preserved in an island inside a water reservoir. 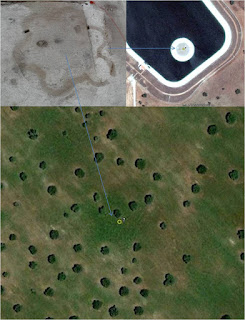 But it is interesting to see, in a Google Earth image of 2003 that vegetation defines the “flower” shape of the enclosure. A very thin suggestion of an enclosure (now easier to interpret, after the site has been discovered in the course of the construction of the tank), but a regular practice of analyse this kind of images, especially when the first evidences of prehistoric material are recorded, may be proved worthy.


And could this be a new one found this afternoon? Possibly. We shall see. 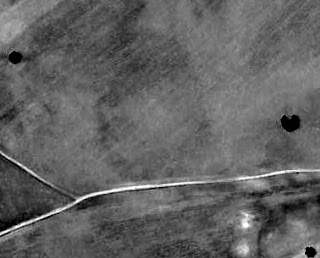 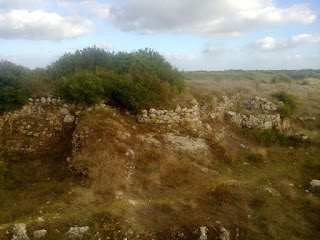 Discovered in 1936, it was excavated in different times, by different people. After the (methodologically poor) excavations of Afonso do Paço (between 1941 and 1967) the site became a reference and would be marking the Portuguese (and non Portuguese) archaeologist’s fantasies for decades. Excavate there became a sort of “alternativa” (the ritual consecration to became a bullfighter). Several felt compelled to put their tools into the ground there, but few published the results. Savory’s section still provides the best information. VNSP didn’t have the best of timings. It suffered at the hands of archaeologist because it became a “star” too soon. Scientifically, it is almost irrelevant nowadays. And when debate occurs, other more reliable contexts are called to the dispute. Just the Cultural Historical culture of VNSP (together with Los Millares) survives from those times, in the discourses of some, as a memory.
And that irrelevance to the discipline may be (part of) the explanation to the fact that this site, classified as National Monument since 1971, has been completely abandoned. Today this is the image: an amount of stones covered by vegetation, where a wall, frequently in ruin, can be perceived here and there. No local information, no notion of the plant, chronology or notice of the fact that the site is considered an important one for the National Heritage (and why). 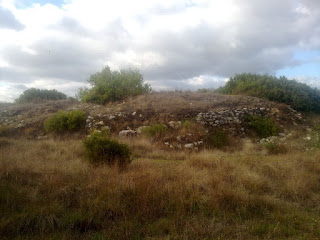 VNSP, being famous abroad, was a victim of the processes of Portuguese archaeology until the late nineties of the last century. Now, it is a monument, not to the chalcolithic people that built it but to the way modern society deals with heritage.
Publicada por A.C.Valera em 8:23 PM No comments: 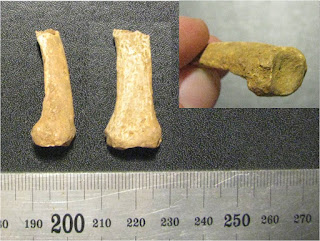 In the recent international meeting (that took place in Lisbon last week) dedicated to enclosures and funerary practices, I made an inventory of the presence of human remains inside ditched enclosures. I noticed that all large ditched enclosures revealed that presence (Perdigões, Alcalar, Porto Torrão, Valencina, San Blás, Pijotilla, Marroquiés Bajos) and that, until now, human remains are almost absent from smaller ditched enclosures (although I underlined that many of those were not excavated or have just small areas surveyed). In fact, only in Bela Vista 5 we have documented a burial in pit, dated from the last quarter of the 3rd millennium.
Well, the surface prospection of Salvada confirmed this situation, at least to large enclosures. Being a “big one” it provided a human phalange (hand), collected just outside of the double inner ditch, between the ditch and the stream that cuts the enclosure in two parts. As to be expected, associated to this enclosure there will be certainly several funerary contexts. Some will be inside, but probably other will be in the outside, surrounding the enclosed area. This large enclosures start to be predictable in some of their characteristics. 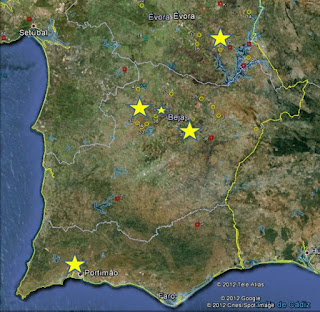 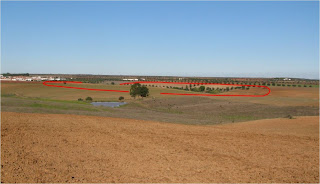 In the context of the work being developed for EDIA (by Omniknos company and ERA assistance), Salvada was prospected today. The enclosed topography is amazing: a deep small stream, with the outside ditches being in the flat lateral tops and then curving towards the stream at North and South. The site is, therefore, a basin (once again), cut almost at the middle by the water line. 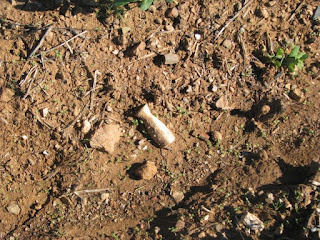 At the centre, where some small enclosures seem to be detected in the aerial images, there is a lot of material at the surface and spreading, with lesser densities, all over the right side of the enclosure. Lots of stone tools, abundance of pottery (plates, carenated bowls, globular pots), loom waits, blades and arrow heads, several grinding stones, faunal remains (and possibly human) and a nice limestone idol. It has definatly a Chalcolithic occupation, but a possible Neolithic origin. 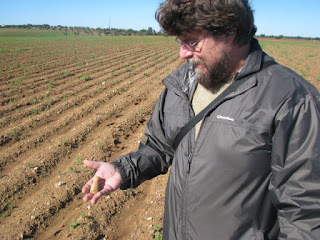 The material was so much that we have run out of bags and had to be creative. 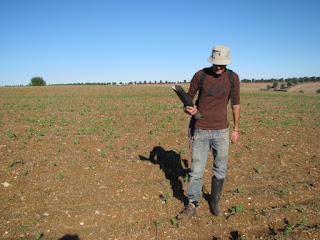 An amazing site no doubts about it.
Publicada por A.C.Valera em 10:33 PM No comments: 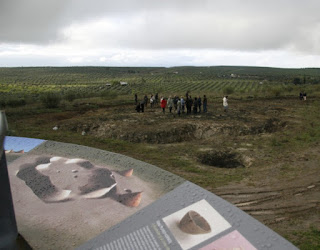 In the context of the International Meeting “Prehistoric enclosures and funerary practices”, the ditched enclosure of Santa Vitória was visited by three dozens of participants. Being aware of the visit, the Delegação Regional de Cultura of Alentejo and the Campo Maior municipality developed efforts to have the site presentable: it was cleaned and the informative placards renewed. A good example of a joined effort of private and public initiatives to display, at an international level, this important ditched enclosure.


It is, though, a pity that, after all this time and in face of the new approaches and critiques, the discourse expressed by the informative placards stays the same. Santa Vitória did not have an internal bank. There is no evidence of it. Not inside the ditches, that have structured deposits of fauna, pottery and stone structures, and not anywhere else. Also the pits of two meters diameter by two metres deep, full of deposits with fauna and archaeological material, hardly can continue to be assumed as huts. This discourse was elaborated almost 30 years ago. Santa Vitória was the first ditched enclosures to be detected and excavated in Portugal, in the context of the “battle” between diffusion and indigenous approaches to walled enclosures. Born in a research context isolated from the European phenomena of ditched enclosures (in its variety) Santa Vitória had to be a fortified settlement.


But today, in face of new theoretical approaches and new empirical evidence, that interpretation no longer stands. And the image of twenty persons from different proveniences inside the inner enclosure is absolutely suggestive of the social role of this small enclosure.


Information should be renewed in the placards, not just the material support of it. And the data that resulted from the excavations, already aged of thirty years, should be published, so interpretations could be argued. Finally, excavations should come back. Archaeological excavations I mean, because the rain waters are excavating bit by bit the unprotected parts of the internal ditched that were not excavated during the eighties of the last century. And not just to save what is being destroyed by nature, but also to provide empirical data obtained with different questions in mind (which imply different methods and new analysis).


I believe that Santa Vitória could yet be an important site in the Portuguese Recent Prehistory of enclosures, overcoming the status of irrelevance that results from its abandonment by research.
Publicada por A.C.Valera em 5:51 PM No comments: