I come back to Santa Vitoria virtual reconstitution. 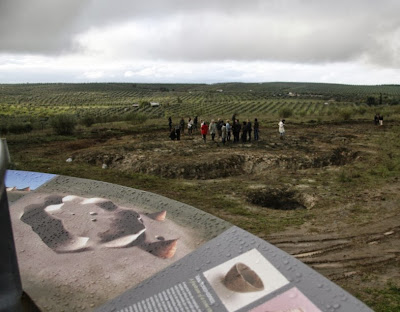 
But my point here is that the impact on public opinion of words and pictures is not the same. I want to argue that drawing a scene is more powerful than just describe it by words. Our society is, more than ever, dependent on visual senses. It is easier to memorize an image than a written discourse.


That should give a higher sense of responsibility to the visual reconstitutions of archaeological sites, and in this particular context, of ditched enclosures. What might be presented as hypothesis in discourse seems to be a certain fact when presented in a drawing or animation.


In time, written things became more valued than spoken ones. Today images seem to have a lead. And where discourse might face a doubt, image tends to receive uncritical adherence.


I don’t know if the readers of this blog agree with this, but I think that we should have this in mind when we decide to use visual representations of our ideas for these prehistoric sites (or any other sites).
Publicada por A.C.Valera em 9:58 PM No comments: 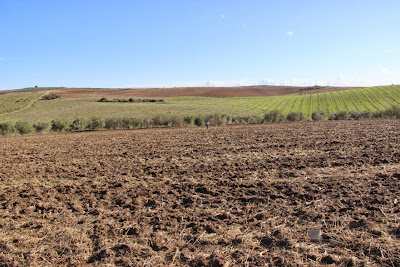 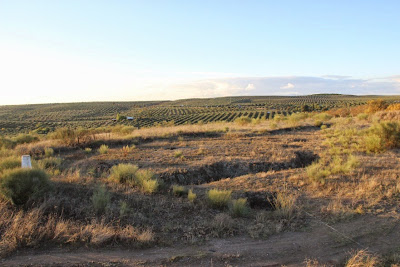 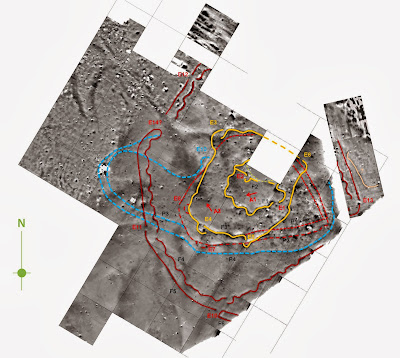 A first one (A) presents mainly palisade structures and has a more irregular design, following the layout of topography.

A second set of enclosures (B), partially overlapping the first, is characterized mainly by ditches, with patterned features (namely gates) and with different designs, more concentric and that don´t respect the topographical layout. 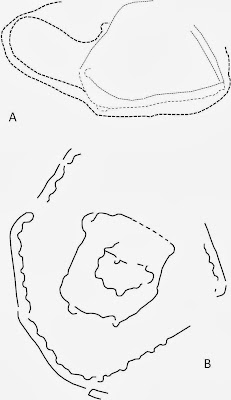 The two possible sets of enclosures.

The two inner ditches of this second sequence (the only ones archaeologically excavated, have been dated from Late Neolithic. That means that the first sequence of enclosures is earlier, maybe from a middle Neolithic. To be true, that would take back a little the emergence of enclosure in Alentejo (as it happens in central Portugal with Senhora da Alegria enclosures).

It would also be interesting to date the outside ditches of the second sequence, the ones that have a sort of polygonal design, for the only parallel we have for that layout is in Chalcolithic walled enclosures (S. Pedro, Porto das Carretas).

This data and ideas were published in: 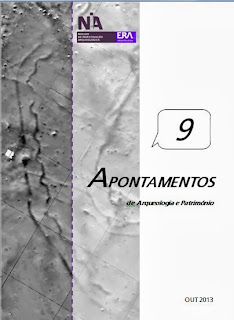 Here are the references:

A concentration of pits in a very small area was excavated at Outeiro Alto 2. The concentration was generically circular (Figure 1). 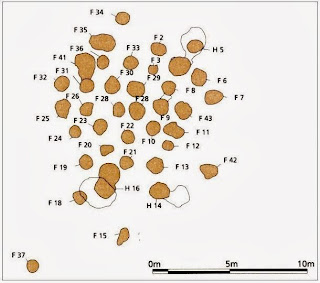 The pits were all almost empty of archaeological material. In the periphery there were three Late Neolithic hypogea and a grave pit (Figure 2). 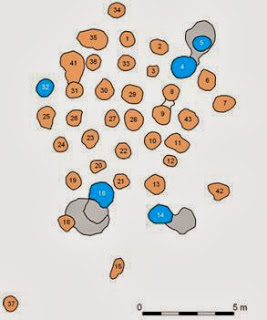 To try to understand the concentration of pits in this small area, with no overlaps and surrounded by tombs, a study of the morphology and volumes of the pits was done. It was possible to cluster the pits in three groups of sizes and deepness (Figure 3). 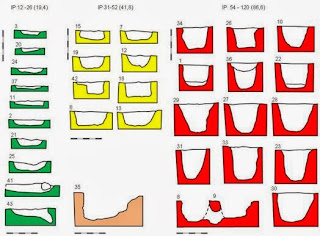 When those clusters were plotted in the plan, a pattern emerged (Figure 4): the deepest pits formed a circle with a square in the centre and two pits towards north; then surrounded by the smallest pits; and the intermediate pits scattered in the SW area. 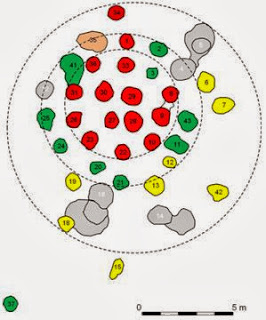 The distribution, the size of the central pits and the absence of archaeological material inside them (just two or three small shards of pottery) clearly suggest a circular wooden structure of henge type surrounded by the tombs.

I have been suggesting that we have several evidences of wood constructions in portuguese prehistory that could be similar to some wood henges or palisades of Europe. One of those evidences is the area C of Outeiro Alto 2 (Valera e Filipe, 2012 pdf). I will talk here about that in the next post.

Today I present the strange case under excavation (by Omniknos/Era): 145 pits, with no archaeological material inside, very close to each other, but with no overlaps, producing several aligned rows. They are clearly for large posts (trunks) and do not define a circle, but an elongated area, partially curved. In the outside curved row an interruption is visible and might correspond to a passage. 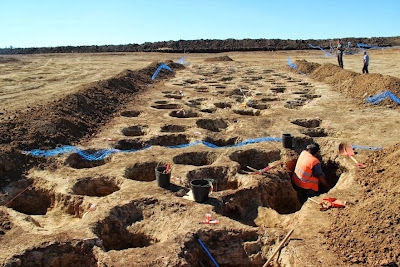 This is a very strange context. If it is prehistoric (there are several prehistoric contexts nearby), it reinforces the idea that many pits are post holes and that we have to have notion of their spatial distribution to detect the kind of structures they belong to (as it happened at Outeiro Alto 2). 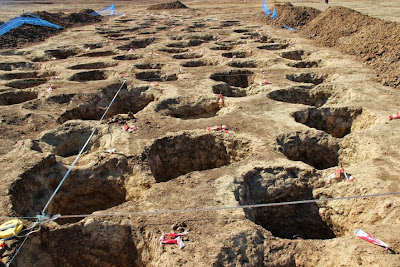 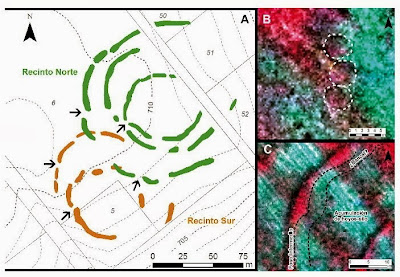 Well, at Herdade do Estácio (Beja), a site being excavated by Omniknos Company (direction of Tiago do Pereiro) a sequence of elongated pits were recorded and they clearly remind the same general plan of a causewayed feature. The materials collected inside the pits indicate a Late Neolithic chronology. The layout and the chronology reminds the enclosure of Fareleira 3, although the ditches are bigger there. 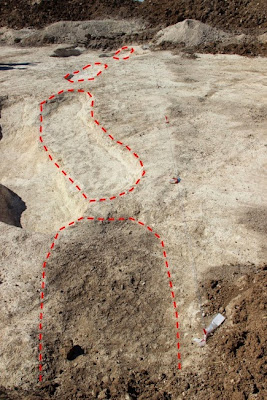 This empirical data is scarce at the moment, but starts to suggest that, once again, we might have in Iberia elements that clearly integrate the peninsula in phenomena of European scale.

The sections are almost excavated. The ditches sizes and fillings suggest they are palisade ditches. But the interesting thing is that it is not one enclosure with two ditches, as previously suspected, but two enclosures side by side, just a few meters distant from each other. 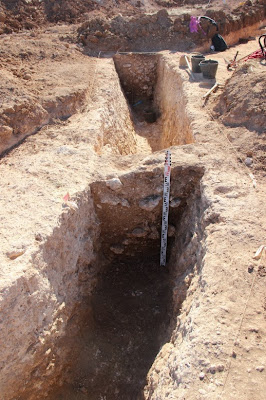 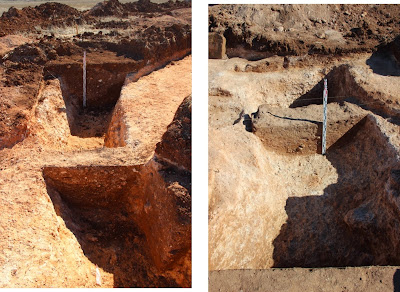 Enclosure B. The two sections excavated. In the right one we can see an interruption corresponding to a gate, as usually facing east.
Publicada por A.C.Valera em 10:47 AM No comments:

Prehistoric sites with ditches are still rare in Portuguese Estremadura. So far we had notice of a small ditch in Mafra municipality (Gonçalvinhos), with an uncertain chronology. Recently a new site with a ditch was published (Pimenta et al, 2013): it is the site of Santa Sofia, in Vila Franca de Xira.

Under a complex occupation of the Late Bronze Age (and following historical periods) a ditch section was discovered and dated by radiocarbon and archaeological material from the Chalcolithic.

Although the characterization of this context is still limited, its discovery is of extreme importance because it documents the presence of these kind of structure in the Estremadura Chalcolithic where, so far, only walled enclosures were known. We will be waiting for the detailed publication of this new ditch context. 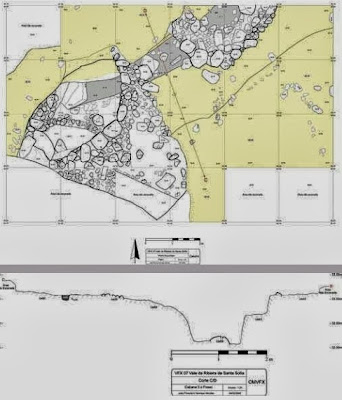