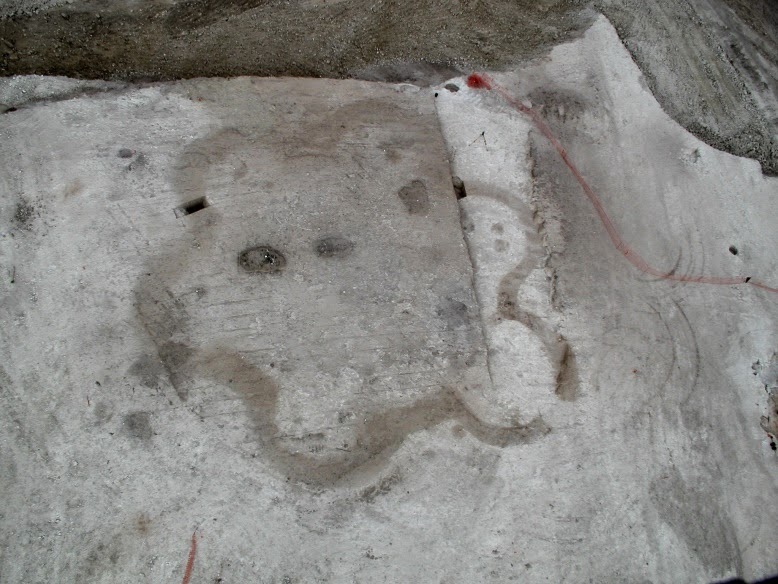 Outeiro Alto 2 is a small ditched enclosure. It has just one ditch with a perimeter of 101m. If the size of the ditch is regular (as the two opposite surveys suggest) it will have a volume of 254 m3, corresponding to 406 tons of extracted rock (1600kg per 1m3, as average for limestone rock). That rock is not in the site: not outside the ditch and not inside the ditch (as it would be expected if there was a bank built with the extracted material). This is a common situation in Portuguese Ditched Enclosures, big or small. 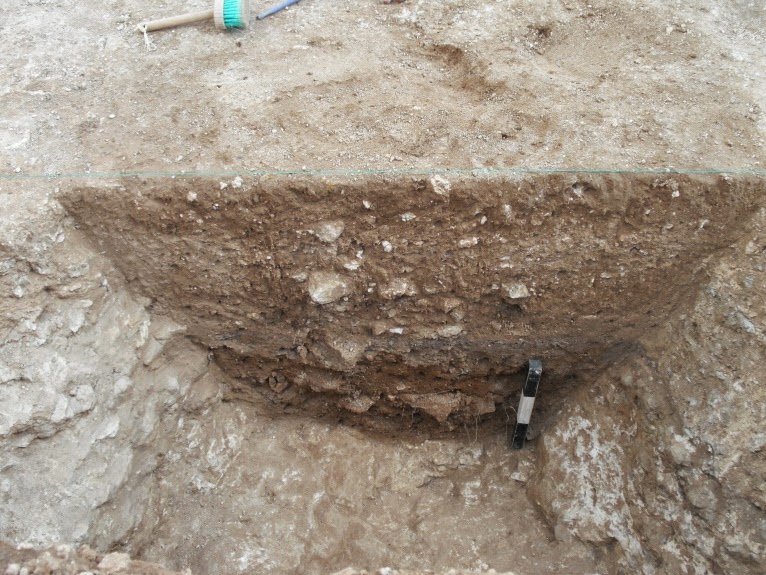 0251 – The chronology of ditched enclosures

According to available data, the building of ditched enclosures in Portugal ended in the last centuries of the 3rd millennium BC. Some show signs of occasional occupations during Bronze Age. But there is no evidence of ditches being built after 2000 BC until the Late Bronze Age, at least in the area of the great concentration of Late Neolithic and Chalcolithic enclosures: the Alentejo´s hinterland. 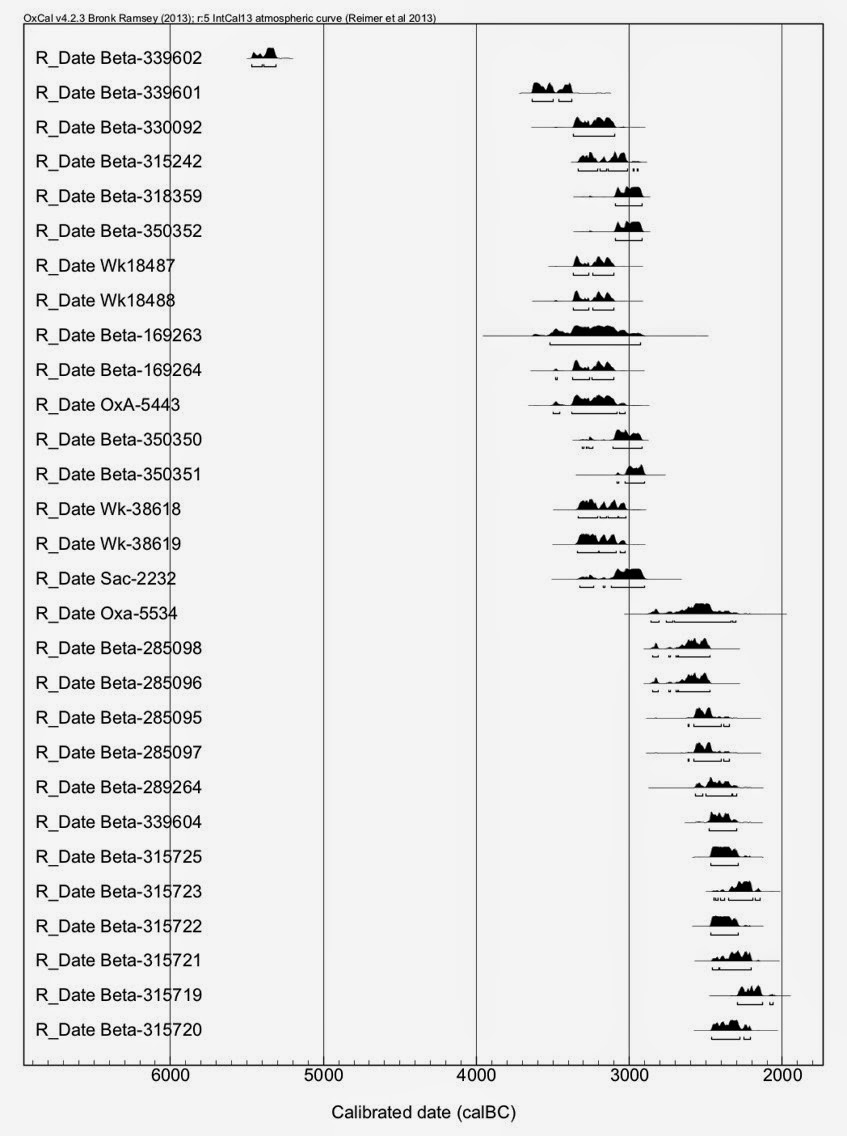 The big question is why? Why such important architectures disappear abruptly? Especially after some of them reach sizes and complexities never reached before.

My answer, published in several papers, is that the reason for the disappearing of ditched enclosures has to do with the disappearance of the reasons for their construction. And that reason was an ideological, cosmological, one. They appeared to respond to a Neolithic world view and related social practices. When that cosmological perception was ending, they reach their biggest sizes and complexity, just like in the end of Middle Ages, feudal societies produced their most emblematic and exuberant architectures: the cathedrals. And then they abruptly disappeared. A significant change occurred by the end of the 3rd millennium beginning of the 2nd. Building ditched enclosures made no more sense. Not because communities stoped having defense problems or draining problems (functionalities that for some are the reasons for these architectures). But because the ideological frame that justified the development of these architectures was changed. The disappearance of ditched enclosures (and of megalithic traditions) in South Portugal marks the end of the Neolithic cosmologies. And a new world view would developed through the Bronze Age, naturally with some detectable continuities, but clearly revealing a new social organization and new perceptions of the world and of human ontologies. Ditched enclosures like the Neolithic and Chalcolithic ones had no place in this new world.
Publicada por A.C.Valera em 10:08 PM 3 comments: 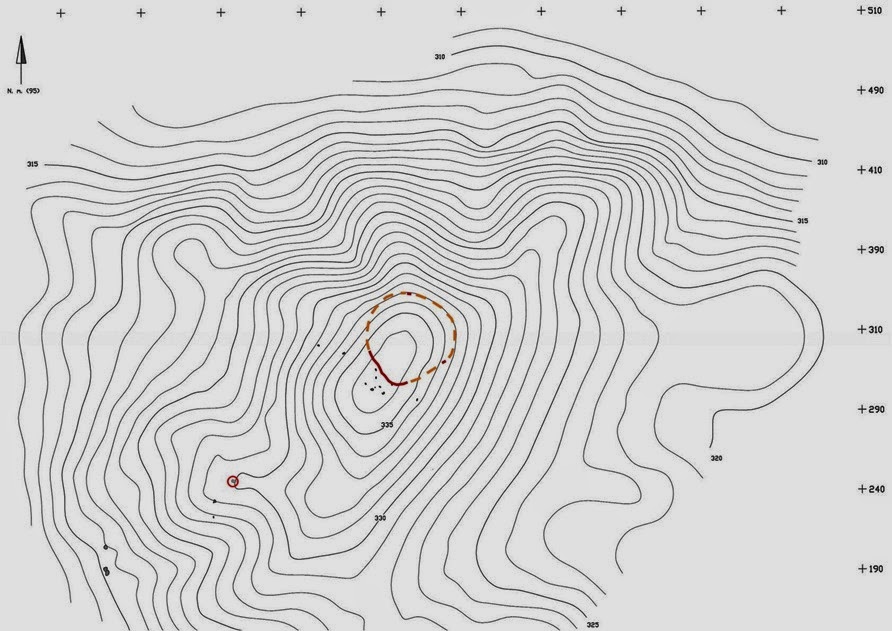 Plan of Torrão ditched enclosure, associated to a cromelec just in the South limit of the ditch and to a megalithic grave in a SW small topographic elevation. (Plan provided by Era Arqueologia S.A.)

This will be the issue of a paper of mine that will be presented at a session in the next UISPP meeting in Burgos. Last week, in the context of my NIA activities, I made a preliminary approach to the subject at the University of Valência. The general idea is to stress that the relations between ditched enclosures and funerary contexts can be perceived in four main dimensions: the sharing of a same cosmological background expressed in their architectures; the way the background is expressed in the combined constructing of meaningful landscapes; the way ditched enclosures and funerary contexts are mutually spatially structured; the way enclosures are assumed as stages for funerary contexts and practices.

In Alentejo’s hinterland we start to have evidence that allow us to address these dimensions and show how deeply ditched enclosures and megalithic and none megalithic funerary and ceremonial contexts are related in the region. They are part of a same Neolithic world understanding that seems to abruptly change by the end of the 3rd millennium BC.
Publicada por A.C.Valera em 11:03 PM No comments:

At the pit grave inside the inner enclosure of Bela Vista 5 there was a Palmela arrow head that was part of the funerary assemblage. That arrow was deposited over a hank of strings. Part of the strings were preserved attached to the arrow’s surface due to its oxidation.

Palmela point with strings attached to it (photo by António Valera)

Analysis show that the strings were made of hemp. This was an interesting finding. Hemp is originally from Asia, but it seems to have spread over Eastern and Central Europe during Neolithic and Chalcolithic. In Iberia there was a context from Late Chalcolithic that provide a textile made of hemp at Abrigo de los Carboneros, but the context have some problems.

Now, at the Bela Vista 5 enclosure hemp appears in a well preserved and excavated context, with a radiocarbon date from the last quarter of the 3rd millennium BC. 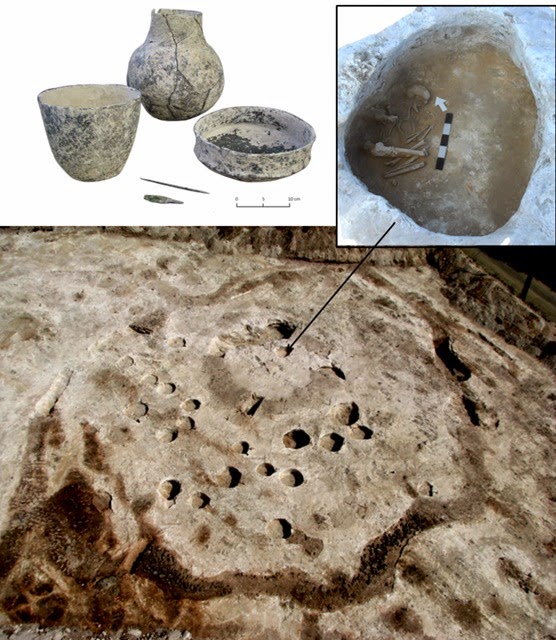 It is the most western context with hemp in European Recent Prehistory, and might be a confirmation of Sherrat’s ideas about the quick spread of hemp associated to Bell Beaker (Bela Vista 5 grave is a late Bell Beaker context, associated to what is traditionally designated in South Portugal by “Horizonte de Ferradeira”).

The publication of this context will be done in a monographic study that will come out shortly, edited by Nia-Era..