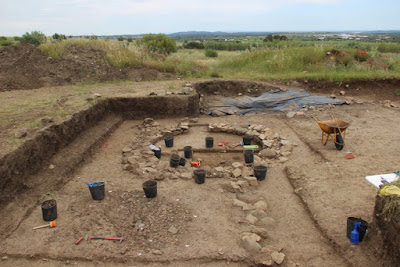 Next Monday we will start the second phase of this year campaign at Perdigões ditched enclosures. As usual it is possible to follow the results here.
Publicada por A.C.Valera em 8:42 PM No comments: 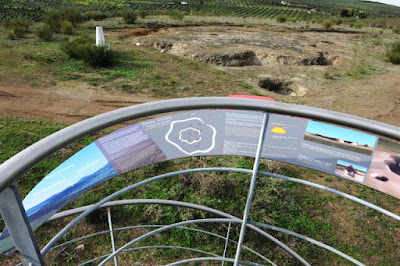 Having been excavated in the eighties of the twentieth century, only a few days ago the ditched enclosure of Santa Vitória was classified as an archaeological site of public interest (one of the protection ranks of the Portuguese heritage law).
It was the first ditched enclosure to be excavated in Portugal and stayed like that for more than a decade. It also stayed unpublished… 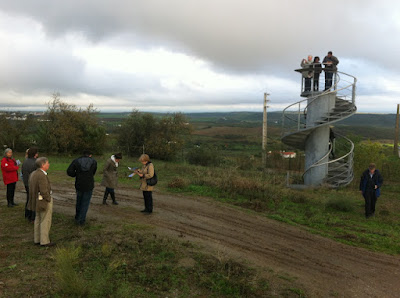 Image taken from here. When the site was visited in the contextof a meeeting organized by ERA in 2012 about Funerary Practices and Ditched Enclosures. We can identify Alex Gibson, Alasdair Whittle, Niels Andersen, Concha Blasco, etc.

But it still has a great potential for the research of the ditched enclosure phenomena and it would be good to go back there with the new views and inquiries that were developed in the last decades with the emergence of ditched enclosures as a structural expression of the Neolithic and Chalcolithic communities of Alentejo hinterland.

In fact, the site has at least two enclosures, both sinuous. The inside one, the one that has the entire plan defined, is well patterned, with the gate orientated to the Summer solstice.  As far as I know, the ditch was filled with significant accumulations of archaeological materials and faunal remains (maybe humans too), possibly through structured depositions. Lots of materials to be dated and to provide a good chronological sequence. Summing up, un important archive still with important information, that gained more importance when just 3km away the large and complex set of ditched enclosures of Monte da Conteda was discovered a couple years ago (See other posts on both sites in the blog).