That seems to be a significant difference between walled and ditched enclosures in Portugal. 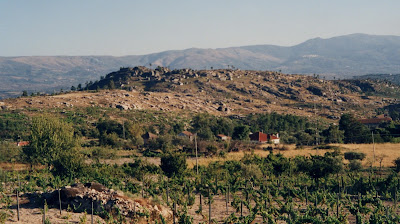 Naturally, as argued before (for instance here), no building is performed in an insignificant space. Everything built is in dialogue with a local landscape, with its meanings, visibilities, resources, particularities. And all of those previous conditions are, in one way or another, incorporated in the building.

But when we compare walled and ditched enclosures we can observe that the former tend to present a great variety of forms of adaptation and incorporation of previous elements of the landscape, while the ditched enclosures mainly reflect a dialogue with topography, geology and visibility conditions.

Rocks, tors or cliffs, are usually incorporated as part of the structures that enclose. Although in other parts of Europe we can see that also in ditched enclosures (like the French “enceinte à éperon”), so far those solutions were not identified in Portuguese ditched enclosures. 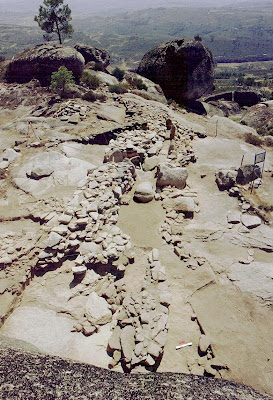 Large wall from rock to rock that defines the inner enclosure at Castro de Santiago.

In terms of the architectonic features, walled enclosures seem to use the available natural conditions in a different way.  Perhaps one of the reasons is that the design, the layout, was less significant than the ones presented by ditched enclosures and answered to different goals. 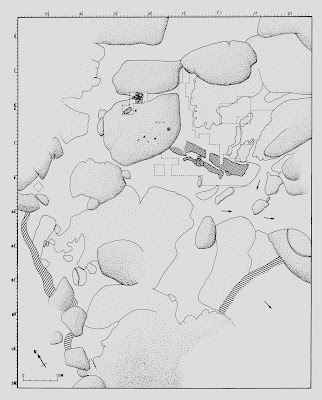 Plan of the several walled structures that, together with the previous rocks, define Castro de Santiago enclosure. 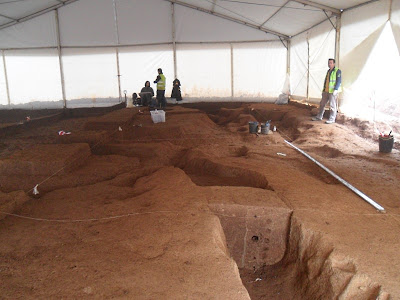 To show an image of a Middle Neolithic ditch that was sampled for pollen analysis. It belongs to a phase of occupation that was dated to the second quarter of the fourth millennium BC.
An intervention of Omniknos company.

Discovered on Google Earth and confirmed in the context of the project: “Plans of ditched enclosures and Neolithic cosmologies - 2" developed by NIA-ERA. It has at least three concentric sinuous ditches. A first publication will be done this year. 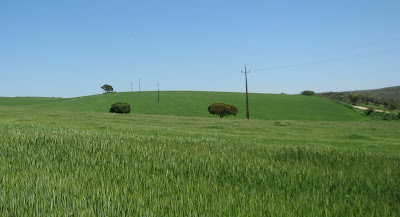 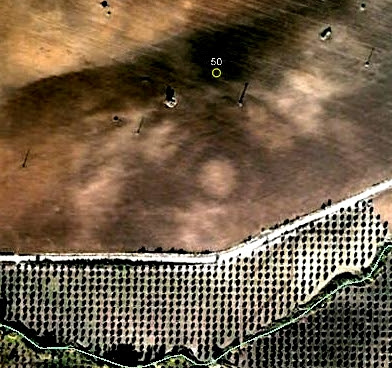 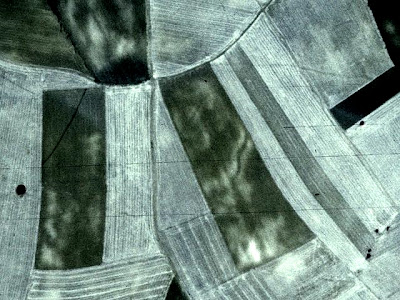 Another "flower" ditched enclosure in Alentejo. It is spring after all.
Publicada por A.C.Valera em 4:48 PM No comments:

In the last few months, in the context of the NIA’s project “Plans of ditched enclosures and Neolithic cosmologies: an approach through landscape, archaeoastronomy and geophysics – 2” (recently renewed) several new ditched enclosures have been identified through Google Earth. I have been noticing some of those discoveries in this blog. And here is another one, from Reguengos de Monsaraz municipality. 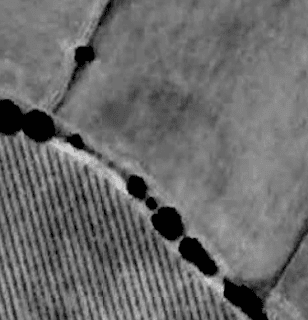 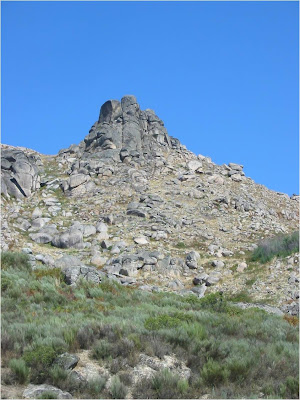 The huge tor of Fraga da Pena used to built a double enclosure in the late third millennium BC. Here seen from the valley.

The approach to Architecture that interests me is based on an anthropological perspective of space, where, in human construction, natural and artificial are cast, as also proposed by ecological approaches. Thinking architectures is thinking their contexts, the global social environment from which they emerge and simultaneously help to fabricate: sets of actions, meanings and materiality through which the human dwelling of time and space occurs. It reflects experiences and perceptions of space; it is relative to technological stages and options; satisfies specific practical needs while expresses and acts over ascetics, ideologies and current social relations; functions as a communication device of explicit and implicit meanings.
It does so through the physical structures but also through the ways space is organized and through associated activities. Corresponds to the construction of active scenarios, conditioned (because they transport tradition and respond to social needs) and conditioning (because they actively interfere in social relations, enabling and conforming them), in the context of human agency in a given time and space.
Architecture inevitably involves a space organization through the imposing of meanings and by doing so goes further than the simple notions of occupation and construction. Furthermore, it deals in a meaningful way with forms but also with the emptiness, with the positive and with the negative, with the added features but also with the previous categorized “natural” elements of a given space.
In this sense, as a process of building and organizing meaningful spaces, Architecture is not linked, in a restrictive way, to the human material construction. In an Anthropological perspective there is no undifferentiated space in human dwelling. Space is always categorized, classified, and only the ways of doing so are contingent. Before interfere through construction, man architects the space using its elements, the experiences and perceptions that they provide and the associated meanings. When building Man tends to use these previous features with their symbolic meanings and associated experiences, incorporating them as architectonic elements in the space organization.
There is no architecture made over an empty and insignificant neutral space. To understand a “building” implies to understand the previous meaningful place where it was built.  Being that a granitic tor (as Fraga da Pena), a natural amphitheatre (as Perdigões) or the particular place where stands the modern Centro Cultural de Belém (in Lisbon).
Publicada por A.C.Valera em 7:08 PM No comments: 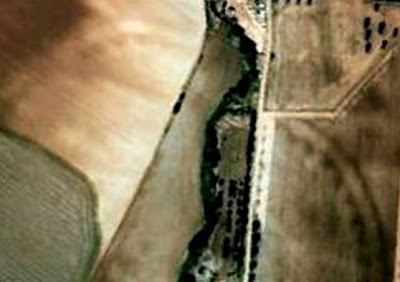 This is the north part of the enclosure of Salvada. As is clearly seen, there is a linear outside ditch and a sinuous one by the inside, with a quite regular lobular pattern (like in Xancra, Santa Vitória or Outeiro Alto 2).


How to interpret this design? The sinuous well patterned ditch implies a multiplication (more than the double) of the effort to open the ditch. And what functional purpose can we detect in that design and effort? Certainly, those that once have seen bastions in these semicircular shapes will not suggest that we have a sequence of bastions side by side, not being able to have the function of a bastion. It would be an absurd proposition, as it would be to talk about water canals.

No, this design has to be explain by the ideological dimension of Architecture and sociology of space and to approach that we have to be well supplied of social theory (of sociological, psychological, anthropological and philosophical origin), or we only be able, with the linear minds of the “axiomatic obvious”, to tell linear old stories perpetuated by lineages of members of the “definite discourse”. 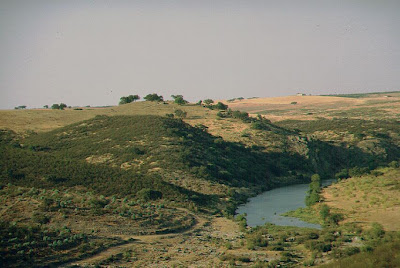 Monte do Tosco walled enclosure is located in the top of a hill, over the Alcarrache river, and was excavated twelve years ago by Era Arqueologia in the context of the mitigation of the impacts of the construction of the Alqueva dam. 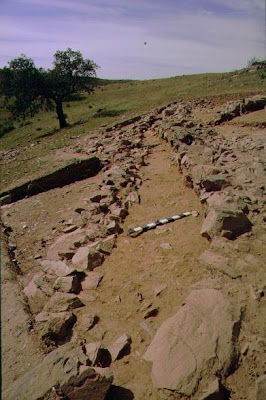 It is a settlement surrounded by a stone wall and an inside stone platform. At least two hut stone structures were identified. These occupation and structures can be ascribed to a plain chalcolithic chronology (first half of the 3rd millennium BC).

Later, the site was reoccupied in Late Chalcolithic / Early Bronze Age, with the construction of a circular stone hut, where several beaker shards and metal tools were collected. 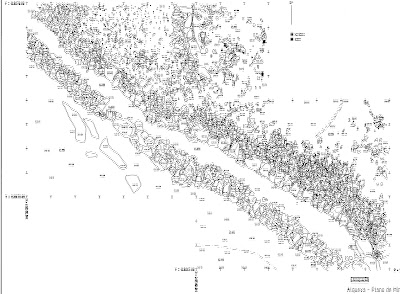