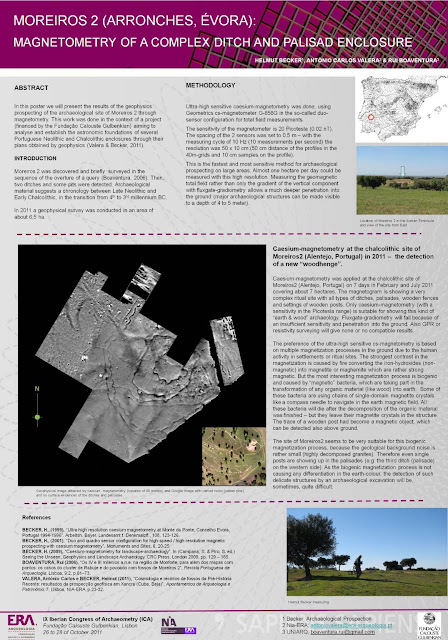 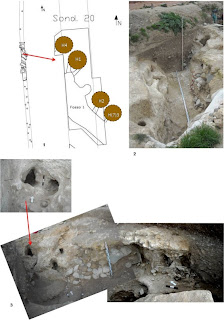 Ditch and entrances to hypogea crypts in the north wall.

At Carrascal 2, near Porto Torrão complex of enclosures, a chalcolithic ditch was partially excavated by ERA Arqueologia S.A. and raveled an uncommon situation.

The ditch, with 2 meters deep and about 4 meters wide, presented a base sectioned in rectangular shapes with a fireplace and in the north side a sequence of hypogea, at least two of them with access through entrances excavated from the side wall of the ditch.

One of the entrances was close by an agglomeration of stones and another by a schist slab. The first third of the filling of the ditch revealed several layers of pavements of circulation, revealing that the ditch functioned as an access atrium to the hypogea.

Over the last pavement, two depositions of human cremation remains were recorded, demonstrating the importance of this specific funerary practice in the 3rd millennium C, just like is being corroborated in Perdigões enclosure.

This kind of articulation of ditches and funerary crypts is new in Iberian Chalcolithic, but shows how diversified practices and structures related to death can be in this period, namely in the areas of the large complexes of ditched enclosures. 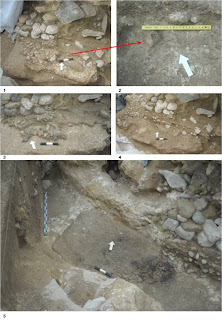 Bottom of the ditch and sequence of circulation pavements with the detail of a deposition of a shell at the entrance of the central hypogeum.
Publicada por A.C.Valera em 5:16 PM No comments:

0168 – About tors used to built enclosures 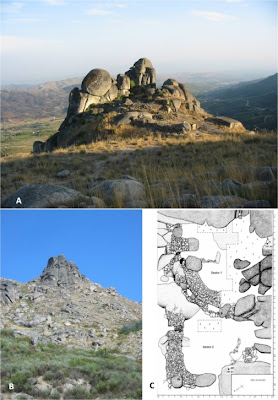 In an Anthropological perspective there is no undifferentiated space in human dwelling. Space is always categorized, classified, and only the ways of doing so are contingent.

Before interfere through construction, man architects the space using its elements, the experiences and perceptions that they provide and the associated meanings.

Frequently, Architecture is a simple recognition and categorization of previous natural forms that are connected to stories, myths, and transformed in active storage of memories and experiences.

In this context, the tors volume and shape might be associated to sculptures or architectures of ancient times, mythic times, ancestral or divine. We can hardly assume that, in Prehistory, these elements were taken as “natural elements”, explained by tectonic and differential erosion.

On the contrary. They probably had associated legends that contributed to the entity of the place, making it a meaningful mark in the landscape, through which space was organized and experienced.

The building of this kind of enclosures is not just a matter of building walls using a favorable previous situation. Walls and tor are integrated in a building where the previous meaning of the natural feature, not conceived as so, certainly had a main symbolic role. The choosing of the place and the decision of building an enclosure there hardly can be understood if we do not consider the meaning and symbolic power of these (for us) natural formations. Even if we cannot precise the specificities of that meaning and power, not consider them will result in a poor interpretation and explanation, that will reflect us more than them.
Publicada por A.C.Valera em 10:08 PM No comments:

The map of enclosures was updated (see the respective page).


Here you have a window over the South Alentejo region, where a significant concentration of ditched enclosures is quite innovative. 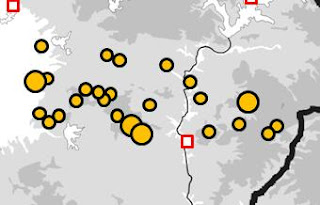 Confirmation of ditched enclosures aerial images has several stages. After identification on an image, it is important to go to the place and see if there is prehistoric material on the surface. If so, the finding is reinforced, but some still need deeper confirmation and definition, that can be obtain by geophysical survey or traditional excavation survey. At this stage of our project we are just performing the two first steps (occasionally, as in Monte das Cabeceiras 2, mitigation work allowed confirmation through diggings).

Nevertheless, in the first step (identification by aerial image) there is a way of controlling the quality of the information: if the same signs appear in images from different years, especially if they have several years of interval, than the probability of a correct identification increases significantly, as it happens in this new case, in Portalegre district. We still don't have surface confirmation for this one, but it looks like a double ditched enclosure (like the outside ditches of Perdigões, or Monte das Cabeceiras or Salvada, but not with the internal sinuous ditch of the later two). It will havemore than 200m of maximum extent, which will put it in the middle size group of enclosures. The left image is from 1995 and the right one is from 2006. Eleven years in between clearly reinforce the interpretation.

When I first saw the image of the Perdigões geophysics, I was digging the Porto Torrão (Ferreira do Alentejo, Beja) ditched enclosures as part of the mitigation work related to the setup of an irrigation component of the Alqueva reservoir (EDIA, SA). This work brought together a number of archaeological consultancies (Crivarque, Neoépica and Archeoestudos).

A monumental double ditch system, which encloses an estimated area of , was identified during this work.

In one of the sectors whose excavation took place under my responsibility (Sector 3 East), the architecture of these monumental structures can be briefly described as:

The Sector 3 East excavation revealed parallel and concentric ditches ca. 30m apart. Dimensions aside, these features are similar to most known ditched enclosures; however the Porto Torrão double ditch system is distinct in one important aspect: the existence, every , of small tunnels interconnecting both ditches. 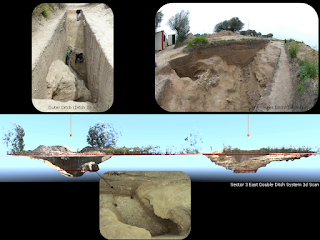 Therefore, I interpret these ditches as a single feature, not as two separate and independent constructions, one meant to fulfill a common purpose. Subsequently, but within the time range of the Copper Age, these features’ original function became obsolete and they were filled-up. Their original purpose and the reasons behind their deactivation in Copper Age times remain open questions

In the area of the site under my responsibility it was not possible fully to excavate these tunnels; in the area under the responsibility of the Neoépica consultancy (whom I thank, and Raquel Santos especially so, for the information), the connection of the ditches by tunnels has been confirmed.

In aerial photography, the layout of the Porto Torrão features reminds the images returned by the Perdigões geophysics: 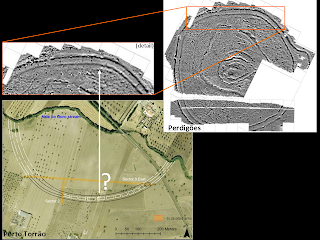 So, the question that I have for now is: are they similar?

You can also see an excavation video here: http://www.youtube.com/watch?v=Ql3JinQEGeg

This is a major problem for ditched enclosures in Alentejo region. In the last few years agricultural fields are being reconverted and olive trees and vineyards are being planted in extensive areas. This is done without any previous Archaeological survey and the result is that a lot of archaeological sites are affected, destroyed or become inaccessible to research (for instance, for geophysical survey).

This is happening with some ditched enclosures, and our “google prospection” is documenting it, for some sites identified in images from 2003 or 2006 are now invisible or almost.

It was this that happened to Perdigões enclosure 16 years ago. There, though, it was possible to interrupt the process after the plowing and assume the area as an archaeological reserve. But recently, several others do not have the same fortune. 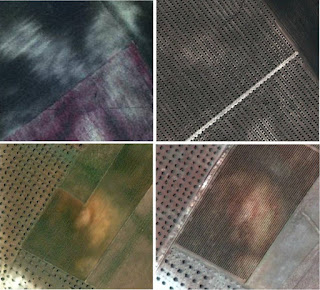 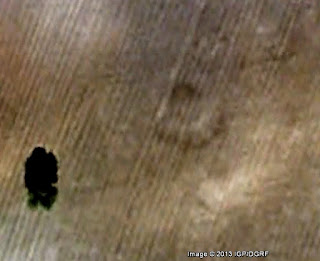 Recently, in Beja municipality, two new ditched enclosures were detected on Google Earth by Tiago, in the context of our project. One was already confirmed in the ground. They dist just 1,4 km from each other and just 6,5 km from Bela Vista 5. It is amazing how they keep appearing in so short distances reminding situations known in Central Europe.

Here are the aerial photos from 1995. 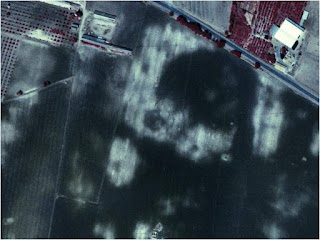 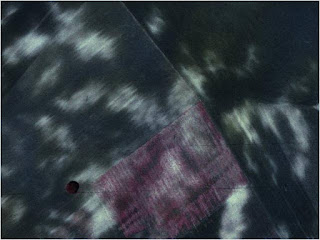