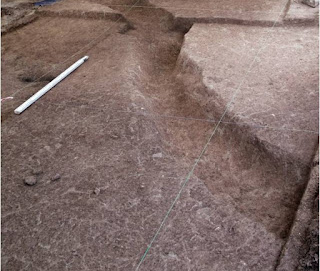 Was recorded in Senhora da Alegria and belongs to the Early Neolithic occupation dated from the third quarter of the 6th millennium BC, with one of the highest percentages of “cardial” decorated pottery known in western Iberia. 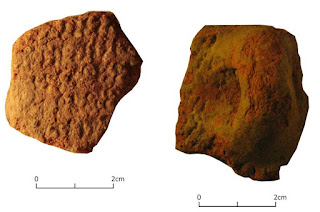 A preliminary presentation of the context will be done next February, 16 (see here).
Publicada por A.C.Valera em 4:31 PM No comments: 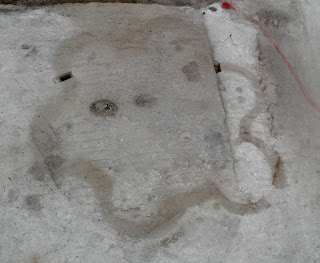 That is what we might say about Outeiro Alto 2 ditched enclosure recently dated in the context of a project financed by FCT (Portuguese Science and Technological Foundation).

This sinuous small enclosure, with patterned lobules, is extremely similar to Santa Vitória one and, in its general regularity, to Xancra, inclusively in the astronomic orientation of the gate. Xancra is not yet excavated, and we just have some surface materials indicating a general Chalcolithic chronology, but Santa Vitória was largely excavated, though never conveniently published. We still not have access to the contextual data of Santa Vitória (excavated in the eighties of last century). Though, a study of the pottery in a master theses suggests an early chronology in the third millennium BC (there is a lot of faunal remains that could be dated, but it seems we have to wait for the next millennium to have access to it – particularities of Portuguese archaeology).

When other sites started to appear showing the same general layout, the tendency was to consider them from the first half of the third millennium, like Santa Vitória. Well, a sample from the bottom of Outeiro Alto 2 ditch was dated from the third quarter of the third millennium, demonstrating that this particular layout of lobules was being done in later times in the Chalcolithic; bell beaker times (although no bell beaker were recorded at Outeiro Alto 2)

This is another dimension of the “empirical revolution“ that is going on in Alentejo. Things are much more complex, much more “mixed up”, than previously suspected. Clear “frontiers” are falling apart everywhere and diversity is emerging as the “main stream” image of the historic dynamics of South Portugal Recent Prehistory.

The context of Outeiro Alto 2 ditched enclosure and its absolute chronology will be published in the next volume of the “Apontamentos de Arqueologia e Património” journal, expected for next April.
Publicada por A.C.Valera em 6:57 PM No comments:

This is a new large ditched enclosure located in Serpa municipality (Beja district), once again discovered in Google Earth. Well, maybe there is not one but two enclosures at the site.

One is well visible. A sequence of three parallel ditches, cut by the road, can be followed in the north part of the enclosure. They seem to define an ellipse and the topography is the same of the large ditched enclosures in Alentejo: a smooth valley cut by a stream with the ditches at the top of the slopes. It measures 340 meters wide. 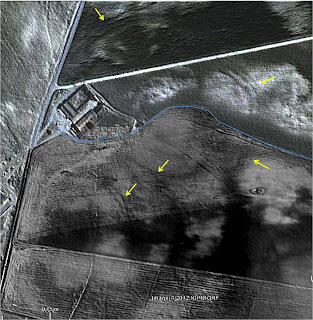 This image is an assemblage of several images (google and areal photos), and embossed, so structures can be more visable.

The south half of this enclosure is not clear. There, another ditched enclosure, inclusively with a wavy ditch seems to be present. The patterns of the curves are not concentric with the other ditches and that might suggest the presence of a different (earlier or later) enclosure.

At the surface, in the north part of the stream, there is a lot of historical construction material (some possible roman), perhaps related to what seems to be an orthogonal structure (indicated by a red arrow). But in the area of the ditches (of the possible two enclosures) prehistoric material is recognizable, like stone tools (knapped and polished) and Chalcolithic characteristic pottery. 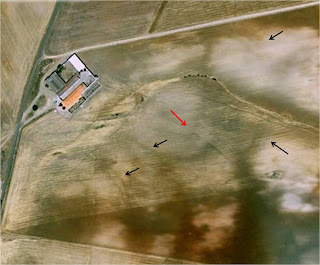 One of the google images used in the previous composition.

This is most probably another middle sized ditched enclosure (like  the ones we have recently identified near Beja – Salvada and Monte das Cabeceiras 2), adding the interesting possibility of being two, probably from different chronologies. A place for geophysics, no doubt.

This site is already incorporated in the Map of Enclosures.
Publicada por A.C.Valera em 4:46 PM No comments:

The Map of Enclosures (click link above) has been updated. 10 new ditched enclosures were added to the previous map.
Publicada por A.C.Valera em 1:56 PM No comments: 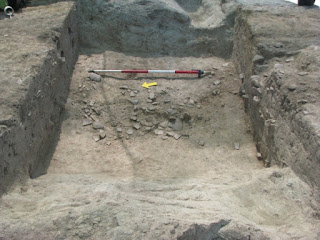 Ditch 8 is still in excavation (it will be finished this summer). It is interesting to notice that the already excavated part has a sequence of deposits that concentrate large amounts of pottery shards and faunal remains (once again almost just pottery a fauna), in a horizontal surface at the centre of the ditch. There were at least three of those layers, separated by deposits with less and more disperse material.

This is a situation that reminds the cover of pottery shards that ended the filling of ditch 12 (the one with the “Almeriense Idols” deposited at the bottom (see here). 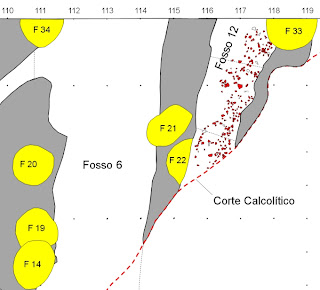 These kinds of depositions inside ditches keep repeating at Perdigões enclosure.
Publicada por A.C.Valera em 11:08 AM No comments:

... is the name of the new big ditched enclosure, discovered just 3,5 km from Salvada. A water supply infrastructure of EDIA is planned across the site and some previous surveys were done by Omniknos company.
To evaluate the implications of the discovery of the enclosures to the project we visited the site yesterday, a day of huge storms in Portugal. The rain and strong wind were annoying, but we could conclude that the site is big and the surface material clearly shows an occupation from Chalcolithic period, as this limestone pot corroborates. 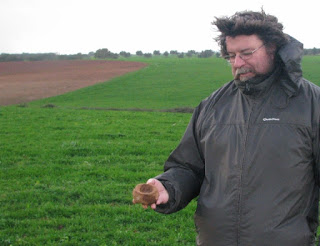 This kind of artefacts usually appear associated to funerary structures, like in Perdigões for instance. Their presence in Monte das Cabeceiras could indicate that the site also has funerary contexts. That wouldn´t be a surprise, since all large ditched enclosures known in Iberia have funerary contexts directly associated.

A new large ditched enclosure was discovered through Google Earth in Alentejo. That is not particularly amazing if we consider the last few months. What is amazing is that this new enclosure seems like a “twin brother” of Salvada enclosure.

It is more or less the same size, is crossed by a stream (not exactly in the meddle like Salvada), has several ditches (at least seven), has linear and sinuous ditches in double lines (again as Salvada), like the former is located in valley depression, seems to have an important Chalcolithic occupation (like Salvada) and, most interesting, is just 3,5 km away from Salvada. It is the first time that middle sized enclosures (more than 10 ha) are so close to each other. Food for thought regarding spatial analysis and theories of site dependence based on size.

The ditched enclosure of Paraíso was discovered in the context of Rescue Archaeology, related with the construction of an urban zone in the periphery of Elvas city. In the rescue excavations pit and ditch structures were identified, but no general plan of the site is available. Still without absolute chronologies, it was considered to be dating from the first half of the third millennium BC (Chalcolithic), but with the possibility of a start in the late fourth millennium (Late Neolithic).

Although no general plan is available, surface material suggest a large site, spreading to the two banks of a small stream. According to that information, the site seems to occupy a topography that makes a slight amphitheatre open to East, a topographical situations similar to Perdigões. Once again the lower areas and smooth slopes, with visibility restricted to a specific orientation (East), are chosen. Here are the profiles that show that location. 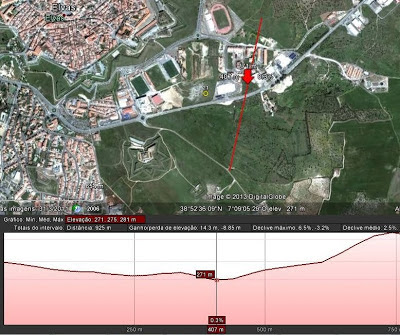 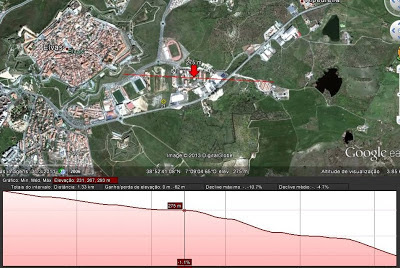 At the Senhora da Alegria, two small ditches define a gate. They probably date from middle Neolithic and document one of the earlier contexts with ditches in Portuguese Prehistory. Not the earliest, because in the previous occupation of Early Neolithic of the same site another small ditch was identified.


But if they are not the earliest at least have the most strange and interesting gate structure ever. 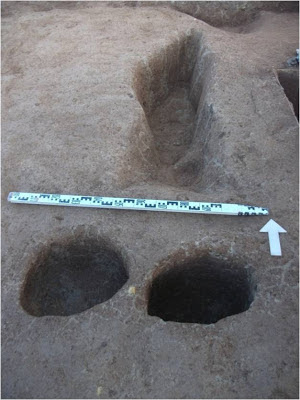 The structure in front the gate of one of the ditch structures of Senhora da Alegria.
Publicada por A.C.Valera em 5:14 PM 2 comments:

I begin today a sequence (with other themes in between) of posts dedicated to enclosure’s topographies and their hermeneutic implications. I start with Perdigões, for the site is an emblematic on the issue. Perdigões is in an amphitheatre, as the two profiles (roughly N-S and W-E) show. 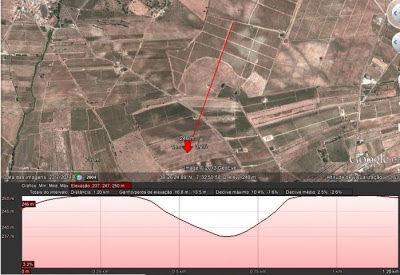 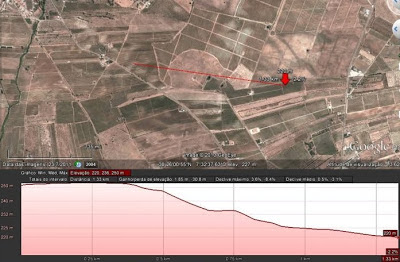 In fact, the builders of the first enclosures of Perdigões, in Late Neolithic, chose  the lower centre of this topography, where visibility was restricted in every direction except to East, in an overture with limits coinciding with the two solstice annual events.
The topography selected responded to symbolic needs, not to defensive ones. That is obvious.
And it is also obvious that the general idea was present when the later ditches defined a larger enclosure, respecting the topographical limits of the amphitheatre and orientating the gates to the two solstices.
The topographical location of Perdigões and relation with the ditched structures is one of the strong arguments in favour of a cosmological foundation of the enclosures architecture through the long life of the site.
Publicada por A.C.Valera em 8:14 PM No comments:

At Perdigões set of ditched enclosures there is an area of semicircular shape, in the Eastside, where an assemblage of tombs is located (the two excavated are similar but not exactly tholoi structures). The ditches 1 and 2 are parallel, but in that area the outside one (ditch 1) makes a semicircular curve to enclose the tombs between the two ditches.


For some time, first based in the aerial photograph and later based on the magnetogram, it was though that configuration of space was created to receive the necropolis. 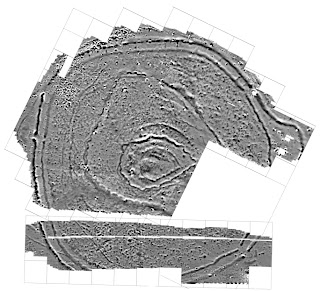 Well, radiocarbon dating is showing something else. The first uses of the two excavated tombs are dated from the first half of the third millennium BC, while the filling of the outside ditch is from the third quarter of that same millennium, suggesting that when the ditch was open the tombs were already there.


It seems now that the presence of the tombs is responsible for the curve of the ditch. What exactly they intended by that? Respect the previous holy ground? A need of enclosure that specific symbolic area that might still in use?


Well, maybe both, since archaeological contexts and radiocarbon dating also show that one of the tombs was reused precisely during the third quarter of the third millennium.


But this is just a later episode of the funerary practices that took place at Perdigões.

Well, I certainly hope so. And, as a way to wish everybody that follows this blog a good year full of achievements, I present an image of our expectations for the beginning of this new year: two pictures, the first with the number of Neolithic and Chalcolithic ditched enclosures known and confirmed in 2012 for Alentejo’s hinterland; the second with the number of sites identified by me and Tiago do Pereiro in google that wait to be confirmed in the field during 2013 in the same region.  The images speak for themselves. 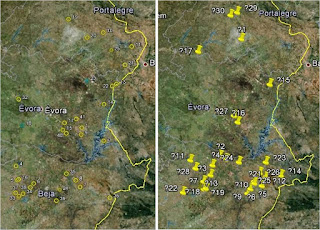 And here are some images of some of those sites (some others were posted in earlier posts here). 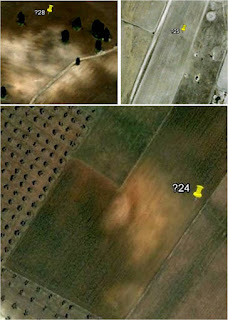 Not everything is clouded in Portugal.
Publicada por A.C.Valera em 2:32 PM No comments: