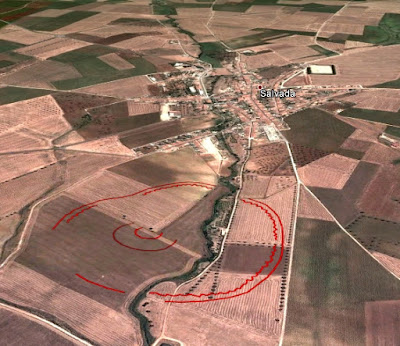 Some ditched enclosures reveal a significant investment in labor in the building of their structures.

The investment in works of significant amplitude has undeniable social implications. Applying complex systems theory to social developments shows us that the higher is the scale of the task and the number of persons involved the harder is the consensual decision and the management of the enterprise, implicating the emergence of leading persons or groups. So, we might agree that, enterprises that require significant amount of work and investment, inherently require specific forms of leadership in the decision and implementation processes. The archaeological data available for the large ditched enclosures of the 3rd millennium BC in Alentejo region would have implicated the development of stronger leaderships that would have initiated processes of social competition and created needs for differential forms of consumption and social display that fed the increase of circulation of the exotic materials obtained through long distance interchange networks. In other words, these large sites of social aggregation seem to have implied the development of social segregation. And if, as Churchill argued, we shape our buildings and our buildings shape us, this is not just true at an individual level, but also at a society level: the development of a monumental architecture during this period was not simply a response to ongoing social changes, but actively contributed to conform and induce them in a trajectory towards social competition and inequality.

But to what extent did this social path developed in the region during the 3rd millennium BC? This is the question that has had significant different answers, in a debate that clearly shows the influence of the present theoretical frames in the constructions of the past.

0302 - The possible enclosure of Mercador

Excavated in the beginning of this century, Mercador (Mourão, Évora) revealed a segment of a stone feature that seems to correspond to the base of a wall that would define and enclosure with a diameter estimated in 14m. 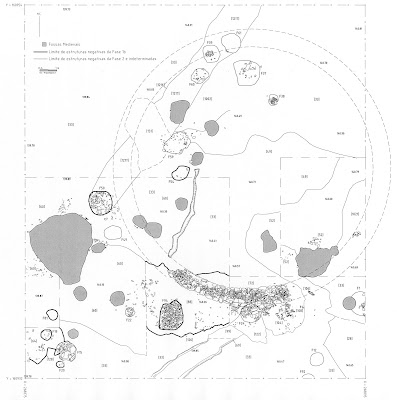 The site, dated from Chalcolithic, had a posterior occupation during the middle ages that was responsible for the dismounting of some of the previous structures.

Projection of the possible enclosure (Valera, 2013)

The eventual enclosure corresponded to the second phase of the occupation of the site and was located in the extremity of a plane top of a smooth rise, facing the valley of the Guadiana river. Outside two circular stone houses connected by a small wall were recorded. The chronology for this phase is from the second half of the 3rd millennium BC, roughly contemporaneous of the second phase of the Porto das Carretas (just 1,5 km away), where there are similar constructions of stone houses (interpreted as towers by the excavators) associated to bell beaker pottery. 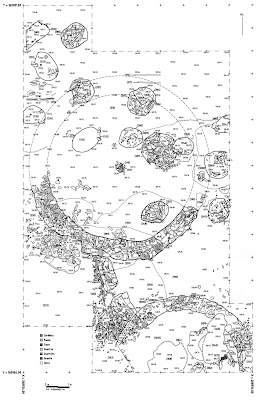 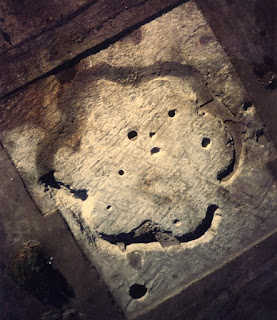 I just came back from Kiel (Germany) were I participated in a congress dedicated to Neolithic landscapes and monumentality.

There I heard that until 2000 there was an inadequate methodological approach to ditched enclosures in Iberia: just small sections; no open area and geophysical approaches; no perception of the real nature of the sites. That to explain the Iberian isolation to what is happening in the rest of Western Europe regarding enclosures.

There was an isolation all right. But that has nothing to do with methods, for they were already here for long. In Portugal, open area approaches were done to walled enclosures since the middle of the XX century, although without much accuracy. But since the sixties, eighties and nineties, we observe them all over Portugal, according to modern record procedures (Zambujal, Santa Justa, Monte da Tumba, Castelo Velho, Castro de Santiago, Fraga da Pena, etc. stand as examples).

Furthermore, the first ditched enclosure detected in Portugal, Santa Vitória, was excavated in open area and submitted to geophysics in the beginning of the eighties, as was the walled and ditched enclosure of Monte da Ponte.

And the lack of contact with European archaeology is also just partially a reason: the German Archaeological Institute worked (and works) in Iberia for long, American, French and English archaeologist have been related to Iberian research since the eighties.

The reasons are maybe others:


a)      The late appearance of ditched enclosures in Portugal (and in general in Iberia);


b)      The fact that Iberian countries were the last dictatorships to be rolled out of western Europe, a fact that clearly conditioned the previous and subsequent theoretical developments of History and Archaeology in Iberian countries and their immediate agendas (to each methods are not independent), that, in the case of post dictatorships,  naturally focus in what was being done until then.


c)      The institutionalization and financing systems of archaeology that emerged after the democratization processes.

The archaeological approaches to Iberian recent prehistory enclosures is a recent issue. Until recently that approach suffered from a certain degree of isolation regarding the European scenario. That is obvious. But that does not allow us to erase the past and the context, and reduce everything to a lack of vision, lack of international contacts and a lack of methods. It is not just the enclosure phenomena that is extraordinary complex.

I agree that the “Archaeology of Enclosures” in Iberia is passing through a process of developments that creates friction, not just with the dominant theoretical approaches, but also with the institutionalized powers that support them. There is a fight, like always was. An antitheses facing the theses. But there is no need to simplify the past to enhance the future.
Publicada por A.C.Valera em 5:14 PM No comments:

0300 - Looking back at Senhora da Alegria 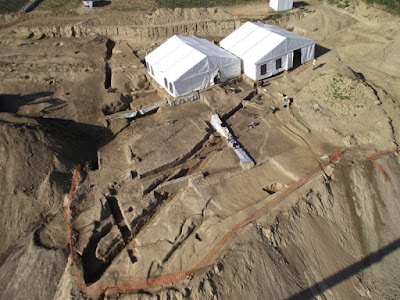 Here is an aerial perspective of the excavation of one of the sectors in Senhora da Alegria (excavations of Omniknos Lda). In this area we have ditches from the Middle Neolithic and a larger ditch dated from the Late Neolithic. It is that larger one that we can see in the image overlapping a smaller one that partially runs beside it. This important site shows us a sequence of ditch construction that, with periods of abandonment, covers a significant part of the Neolithic, since the second half of the 6th millennium BC until the late 4th millennium BC. The monographic publication of the excavations will take some time. It is a complex site with a great deal of archaeological materials. The importance of the site, though, will oblige to some extra commitment.
Publicada por A.C.Valera em 4:02 PM 1 comment: