0416 - Talk about the dramatic situation of Portuguese Ditched Enclosures 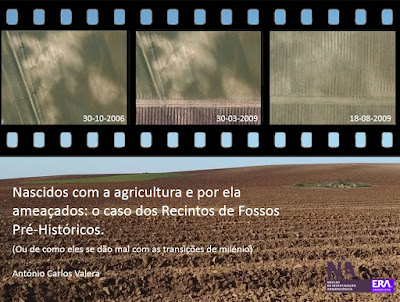 Next week, in Serpa (Alentejo, South Portugal), I will be speaking about the actual situation of Portuguese Ditched Enclosure in the region, where these sites have their major concentration and reach the higher monumentality in Portugal.
It is an event integrated in the commemoration of the  International day of Monuments and Sites, that, unfortunately, we have to use to show what we don't do and should be doing regarding heritage preservation.
I will be talking about the drama that Prehistoric ditched enclosures are facing. They represented the social trajectory of Neolithic communities until the end of the 3rd millennium BC, when this path collapsed and ditched enclosures with it. They didn't do well with the transition from the 3rd to the 2nd millennium BC.
Well, again, they are not doing well with another millennium transition, now from the 2nd to the 3rd millennium AC. In Alentejo, they were born with agriculture (not out of agriculture, as some argue), and their archaeological remains are now being destroyed by it.
I will try to show their historical, cultural and social value, and show that are several that still can be saved from the cultural, social, environmental and heritage disaster that is happening in Alentejo, sponsored by the Portuguese Government.
Publicada por A.C.Valera em 5:46 PM No comments: