0343 - Perdigões enclosure and the Guadiana river

A paper about the exploitation of Guadiana river resources in the enclosure of Perdigões was recently published (and it is available here). It is a paper about a unique decoration inside a pot. 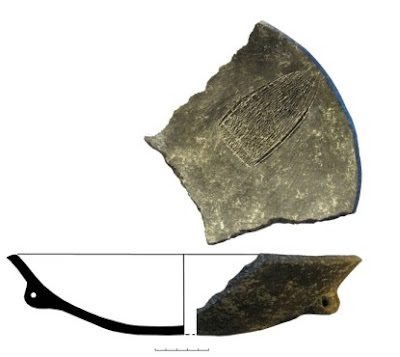 In favour of this last possibility the presence of fish bones of river species in Perdigões was underlined, revealing the exploitation of Guadiana river resources by the communities that circulated in the enclosure.

This paper has already generated some comments from colleagues and one of them (Gabriel Martinez, from Granada University) alerted me for this evidence: a Neolithic fishing trap recovered in Russia that seems to be very similar to the ethnographic ones presented above, reinforcing the possibility that the image from Perdigões is evoking the importance of the river Guadiana to these communities. 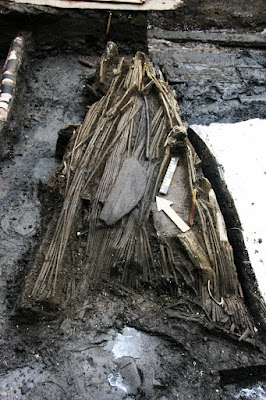 0342 - The diversity of ditched enclosures 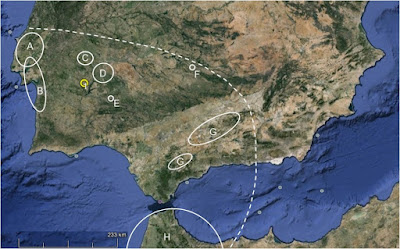 Area of interaction of Perdigões. Image taken from VALERA, A.C. (no prelo), “The “exogenous” at Perdigões. Approaching interaction in the late 4th and 3rd millennium BC in Southwest Iberia”. Proceedings of the Meeting Resource Cultures (June 2015), Alcalá de Henares/Madrid.


It is clear that ditched enclosures present significant differences between them: size, location, temporality, complexity, etc. So, if at a very general scale they can be addressed as a whole, sharing some general principals, it remains to be established by research if they correspond to a useful formal category. We can talk about religious architectures, but putting cathedrals, monasteries and small chapels in the same bag is not particularly useful for understanding the historical processes of Christianity. They played structural different social, cultural, political, symbolic and economic roles in those processes.
Regarding the Portuguese prehistorical enclosures one significant difference (that can be extended to the southern Spanish ones) is the evidence for interaction. This evidence is intense in the large ditched enclosures and scarce or absolutely absent in smaller enclosures, according to actual available data. For instance Perdigões has a significant amount of exogenous materials squandered in funerary contexts that show relations with the entire Southwest quarter of Iberia and North Africa, while the neighbours smaller enclosures of Montoito, Torre do Esporão or Luz 20 do not present evidences of such interaction or evidences that they were stages for funerary practices. And we could extend these differences to temporality, intensity and periodicity of construction, evidences of rituality and feasting, etc.


Are these differences corresponding just to a variability range inside a coherent category of “ditched enclosures”? Or are they showing us a category enclosing different historical entities sharing some general structural principles (that are also shared with other architectures of the time), but that played significant different historical roles? Are the differences of scale and complexity only quantitative or also qualitative? Those are not axioms, they are questions for research.
Publicada por A.C.Valera em 11:14 AM No comments:

The brasilian Jê enclosures will be present at the meeeting Enclosing Worlds, where the enclosing phenomena will be discussed by confronting different historical situations and trajectories from different parts of the world. You may see the abstracts as they are being progressivelly dislayed at http://enclosingworlds.blogspot.pt/p/abstracts.html.