They are being presented here. 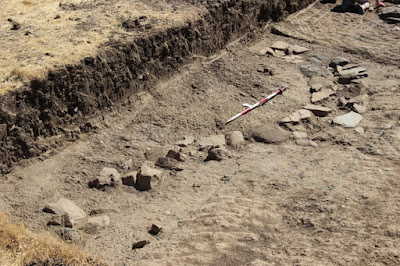 0339 - And another paper on Portuguese Ditched Enclosures

Now about the relations of those sites with funerary contexts at several scales (from cosmology and landscapes to specific funerary structures). It is available in Academia and Research Gate. 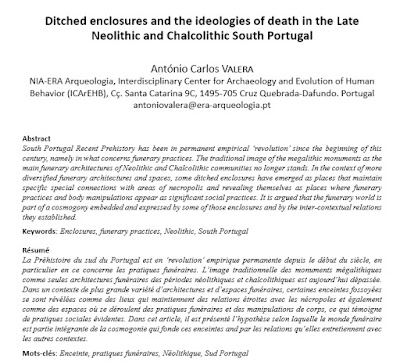 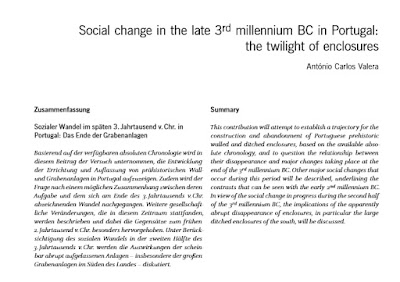 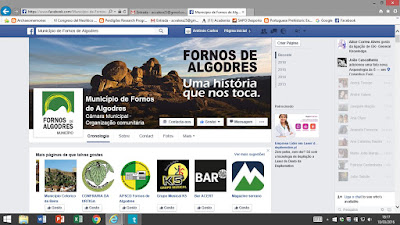 Fraga da Pena (Fornos de Algodres, Guarda) was discovered for Archaeology by me (and two “Isabels”) in 1991. Between that year and 1998 I excavated the site and produced a scientific discourse about it (part of my PhD thesis). It is now an important context in Portuguese archaeology regarding the bell beaker phenomena and the late 3rd millennium BC, as well as for the debate regarding enclosures in Iberia.


That work gave way to a project of public display that tried to bring the site back to a socially active role (see here what was done). Today, it is used as the main banner of the Municipality page on Facebook (where we can read “A history that touch us”) and its profile is in the logo (left side) of the municipality (curiously with the representation of the sun, something that might have been important in the site’s role in Prehistory (see here).
I am happy. The Fraga is back as a meaningful place and not just for archaeologists. Job done. My thanks to all that have contributed to this, and they were many: from Portugal (obviously the majority), Spain, Czeck Republic, Hungary, Turkey, France, Belgium, USA, Norway, Wales, Poland…
Publicada por A.C.Valera em 7:13 PM 1 comment: 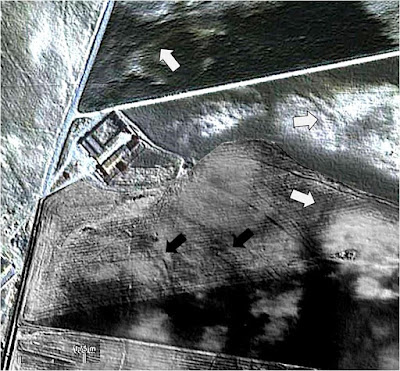 One of the issues to be discussed today at Oporto meeting about enclosures and methodologies: the need for complete plans in order to interpret these sites. Especially those that seem to be enormous: Being huge, recent data regarding large plans suggest that they might not be so big. The surface distributions might rather correspond to successive constructions through time that have lateral displacements, giving the perception of sites bigger than they in fact were.
Publicada por A.C.Valera em 8:39 AM No comments:

A paper that was recently published about the trajectory of ditched enclosures in western Iberia: 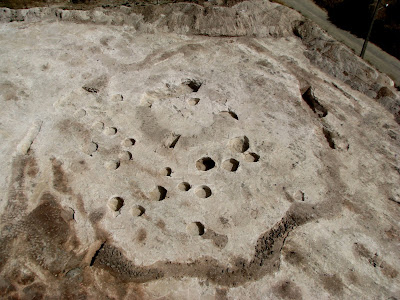 Bela Vista 5. One of the latest ditched enclosures of western Iberia 3rd Millennium BC.

Here are the Final Remarks:


"In Portugal, especially in the Centre-South, the end of the 3rd millennium BC also marks the terminus of the social path that was developing since the Late Neolithic. Is this a direct consequence of a climate break down, of incompatibilities of the global social system or both?
What follows immediately at the beginning of the 2nd millennium BC shows that the operated change was of structural scale, affecting the social and the economic, but also the ideological, the cosmological and the ontological dimensions of communities, their ways of organizing the territories and building meaningful landscapes (as it happens with the enclosures of Perdigões and the megalithic monuments in the Ribeira do Álamo valley) and, most probably, affecting their demographic composition. Some of those changes can be traced back to the third quarter of the 3rd millennium BC, namely the increase of social differentiation and a progressive emergence of individuality in funerary practices. But during that second half of the millennium enclosures, one of the emblematic expressions of Neolithic trajectories, maintain their social role and through their architectures and social practices, were still organizing the landscapes and the social life. So structural changes were in course during the second half of the 3rd millennium BC and these changes cannot be explain by hexogen conditions to the social system.
However, the abrupt disappearance of enclosures in the last centuries of the 3rd millennium BC is suggesting that some event-like situation may have interfered with that trajectory of social change, but the archaeological record, namely the anthropological one, do not show signs of clear generalized conflict or disease and evidence of climate changes significant enough to be responsible for triggering structural social changes are not suggested by the scarce available palaeoenvironmental data. An environmental impact in the last centuries of the 3rd millennium may not be ruled out, but is not yet demonstrated in this region and especially would not justify the social changes already in course (like the structural ideological changes behind the progressively substitution of collective burials by individual ones). It could however help to understand a sudden demographic break down, a reorganization of settlement patterns and territorialities and a temporary collapse of large scale trade networks. But why enclosures, namely the ditched enclosures, were built no more? For that we must have a cultural answer: the social reasons that were behind their appearance and development (and that were related to the Neolithic cosmologies and to the ways they embodied the social life – Valera, 2012b) were no longer there in the first half of the 2nd millennium BC. Immanent social developments and external environmental causes may be combined to explain the abrupt changes and the outcome observable at the beginning of the 2nd millennium BC, but the relative weight of each element is difficult to evaluate at the moment.
There is also the question of the divergent trajectories presented by some walls enclosure in the Center and North Portugal, namely Zambujal, Castanheiro do Vento and Castelo Velho, where these sites remain occupied and wall construction continues. It is not clear, however, if this traduces in fact continuity or if the occupations present different characteristics and are in some way integrated in new forms of territorial organization. In fact, these continuities are the exception, not the rule and like in the South, changes in several dimensions of the social organization can be appreciated by the beginning of the 2nd millennium: the abandonment of the practice of collective burials, the end of the production of iconographic materials, the decay of large scale trade networks, a profound transformation of the ceramic equipment and an increase of the production of metal weaponry frequently associated to individual status is also documented, especially in Estremadura. So it is not totally clear if the continuity of the occupation with building activity in some walled enclosures is traducing different regional socio-economic trajectories or just local and punctual peculiarities of a more general trend of social change.
In spite of the significant developments of the last decades in the research of social complexity in the Late Neolithic and Chalcolithic of western Iberia, there is still missing important and consistent information about what happened in the last quarter of the 3rd millennium BC and about the nature of the break of the previous social trajectories. Answers, therefore, have been relaying essentially in the logical formats of theoretical models, frequently with weak empirical support. Interdisciplinary research specifically orientated to this problem is needed, namely to obtain well dated and characterized site occupations of the last quarter of the 3rd millennium BC, to appraise the population of the period in demographic terms and to adequately evaluate and measure climate trends, before we can more confidently talk about this process of social change."