The walled enclosure of Monte da Tumba (Torrão, Alentejo) is a good example of an intermediate abandonment in a site that originally (Silva & Soares, 1987) was considered to have a continuous sequence of occupation.

“The potent stratigraphic sequence of Phase I is interrupted by also potent wall ruins. Over these ruins a new occupation phase took place and new constructions are built. In this phase, a house seems to have been burned and the roof has fallen, preserving a material assemblage in good state. New ruins are then identified and a new (3rd) phase is defined, also with new constructions, like a central tower. According to the excavators, this sequence of continuous occupation is of 500 years.”


“In this discourse, no temporary abandonments were considered. In reality, it is not probable that two moments where powerful wall ruins are formed over which new construction are built and substantial changes in material culture can be observed (like the appearance of copper metallurgy in Phase 2 or the bell beakers in phase 3) didn’t implied interruptions in the occupation of the site. Ruins and generalized destructions as described do not happen in a day (unless by catastrophe) fallowed by a new occupation next day, with new constructions, new technologies and new artefacts previously inexistent. And we must remember we are talking about 500 years.”
(taken from Valera, 2003)

In fact, this sequence clearly suggests the existence of periods of abandonment in the sequence of occupation of the site. Determine the reasons of those abandonments, their dynamics and duration (all people left at the same time? They intend to come back? Were the same, their descendents or others that reoccupied the site? Etc.), and the reasons of reoccupation are central to understand the role of these sites in local and regional settlement networks and their historical circumstances throughout time. Abandonments are as important as occupations, just like what is missing is as important as what is present.

0103 - The importance of good geophysics

The importance of good geophysics is evident. It can provide a global image of a site (that we can only have by traditional archaeological excavation after at least some decades) allowing the development of the scientific inquiry and research, it is not intrusive, so it doesn’t rise the problems that an excavation does, and provides a powerful planning tool (in research or impact assessment contexts).

At Perdigões, the geophysics done by Helmut Becker (Márquez-Romero et al. 2011; Valera et al., in press) is important, not just for the general interpretation of the site, but because it allows the contextualization of the excavated areas in a broader picture. Now we know exactly where we are in the site. But also important, we can plan where we want to be.

And in this year campaign, this is one of the places we want to be: the area inside Late Neolithic Ditch 6, where the geophysics showed two tiny lines that might correspond to palisades. 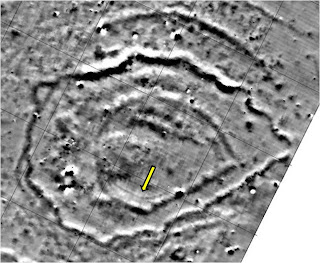 Well, we prepared the excavation by removing the ploughed upper level, and there it was: Ditch 6 and inside two smaller parallel ditches corresponding to the geophysical image (with an extra: a small pit between Ditch 6 and the first inside line). The goals, now, are characterize these structures, try to determine their functionality and date them. 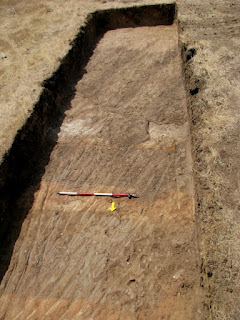 Survey area, confirming the presence of the structures.

It will stay available in the page dedicated to maps.
Publicada por A.C.Valera em 5:54 PM No comments: 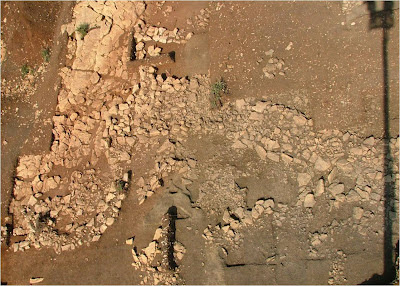 Image of the wall structures on Fonte Quente (taken from Batata & Borges, 2011)

Known since the early times of the XX century, and with several interventions along that century, the Fonte Seca site was recently submitted to a large area excavation, due to the construction of a highway (Batata & Borges, 2011). This last intervention revealed a large walled enclosure. According to the excavators, it is now one of the biggest of Central Portugal, with an estimated area around 20ha.

Three walls were detected, some with semi circular bastions. Metal artefacts and evidences of copper metallurgy were also recorded as well as beaker pottery and schist plaques with geometric decoration (typical of Alentejo region, but also present in the Tejo valley).

In an earlier survey (Oosterbeek, 1994) one radiocarbon date was associated to one of the walls: 3790+/-120BP. Calibrated at 2σ, and due to its large standard deviation, this date presents a huge interval between 2600 – 1850 cal BC, but that goes well with the later materials, like the beaker pottery.