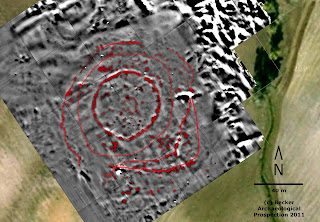 Here is the image of the magnetogram of the ditched and palisade enclosure of Monte do Olival 1 with Helmut Becker’s interpretation of the negative structures present at the site. This interpretation will be published next month in the electronic journal Apontamentos de Arqueologia e Património (a free download journal).


One of the things we learn with Helmut is that having a magnetogram is not enough. We also need good interpretation, based on the knowledge of geophysics, but also of the type of contexts we are dealing with.
Publicada por A.C.Valera em 2:47 PM No comments: 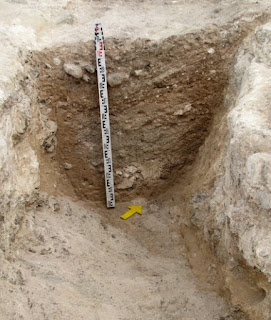 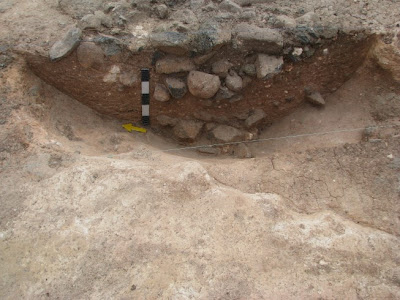 Sections of the outside ditch at Bela Vista 5:a previous layer was excavated in the centre and after refilled with other deposits.

This is, in a certain way, another version of overlapped ditches problem. In fact, it is frequent to record evidences of ditches that were reopened, by the re-excavation of part of its previous fillings. It is important to notice that only when the reopening is partial is it
detectable by archaeology. The total remove of previous filling deposits leaves no evidence, and if they occurred, then these activities would have been even more common.
This creates problems to ditch dating, because there might be a significant time between the initial excavation of a ditch and its last filling sequence. Only with several sections and good dating sequences we can evaluate these problems.


But another problem is why they reopened some ditches? And why frequently just a central part of the ditch, leaving a ditch with “walls of sediment”? Is it because they want to rapidly fill it again with new deposits and materials? They must have done so, otherwise those “walls of sediment” would have been eroded (and we can clearly see them in some sections, like the one presented here).

This is an important issue for ditched enclosures understanding that hasn’t been researched as it deserves in Iberia. Here is a situation from Perdigões that we just started to approach. 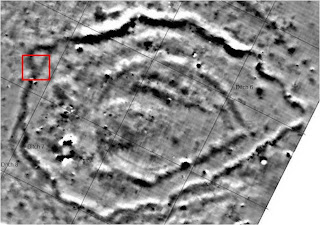 In sector P we open an area to research the overlapping of ditches 7 and 8. The first observation is that, contrary to what we assumed by the geophysics magnetogram, ditch 8 is older than ditch 7. In fact, it is ditch 7 that cuts ditch 8, and partially “walks over it” in the excavated section. 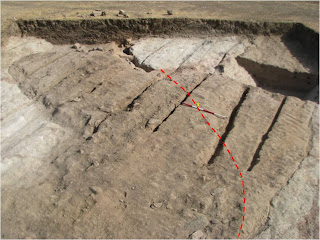 
It seems that they just wanted to cut a new ditch, with a wavy plan, with no regard to previous ditch 8. But, if we look to the magnetogram, ditch 8 is a concentric mach to previous ditch 6. And why the ditch has part f its trajectory inside ditch 7, and then sudden  get outside, and then curved to be over it, just to get in again?


The conclusion is that no easy modern rational explanation can deal with these strange practices of opening ditches at Perdigões. We must keep our minds opened in the presence of these enclosed spaces.  The previous seems to condition the posterior, but in very complex ways not easy to explain.
Publicada por A.C.Valera em 4:30 PM No comments:

In the paper quoted in the last post I draw attention to the relation of the decorated Bell Beaker pottery contexts and the geology of South Portugal. At the presentation in the 2005 meeting I showed the following map that clearly shows the concentration of the sites within well defined geological borders. 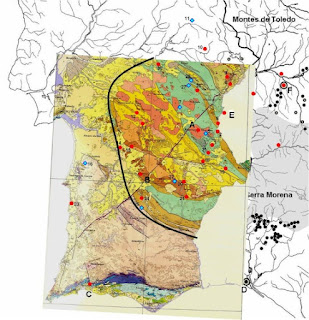 The middle Guadiana basin, with its geological diversity and good soils and plains, and the poor littoral sandy platform and the schist with wavy topography at the south, making the north limit of the mountains that separate Alentejo from Algarve littoral platform.


Well this same situation can be observed in the enclosures distribution as we know it today (or for the megalithic or hypogeal graves). The line in the map of enclosures marks the same geological limit of the first map. And it speaks for itself: there is a strong connection between the structural geology of south Portugal and the structural aspects of its human occupation. 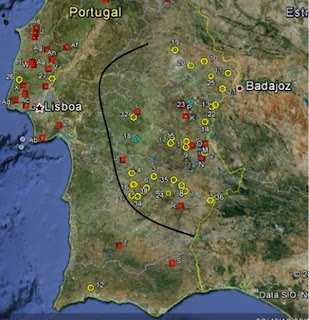 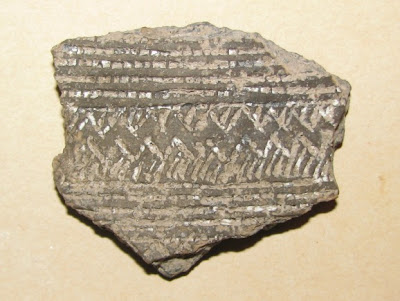 Bell Beakers are not common in Portuguese ditched enclosures. Well, in the small ones. There, they are virtually unknown. Even in those built in bell beaker times.


But at the enclosures that grew bigger, to became large ones, like Perdigões and Porto Torrão, beakers are present and they can be very well represented (as it happens in Porto Torrão).


But that is not it. A pattern emerged in the last years. In small sites, sometimes reoccupations of walled enclosures (but never ditched ones), we tend to have beakers of a mono style (maritime, or incise, or combed geometric). But the large ditched enclosures are the only ones where we have all these styles together.


A paper of mine has recently been published on this issue here.


Notice that in the maps, Perdigões is told to only have maritime and incised beakers. Well, this summer things changed, and combed geometric beakers also are present.


But only in the big ones we have the presence of the three main styles. Another sign of the social role of these large enclosures.
Publicada por A.C.Valera em 7:48 PM 9 comments: 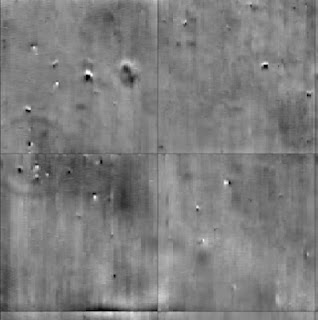 It was a project developed by Era Arqueologia, and the geophysics was, of course, done by Helmut Becker with the results he usually provides.


Just 800 meters way from Porto Torrão traditional limits, and associated to a large area of necropolis, here is a small and perfectly circular ditched enclosure, with just 20m diameter.


A gate is visible at NW, possible orientated to sunset summer solstice.


At Porto Torrão things are much more complex than everybody expected and, I would argue, still expect.
Publicada por A.C.Valera em 9:44 PM No comments:

Is the second situation in Perdigões, separated from the first one by more the 500 hundred years: the depositions of idols in the bottom of ditches.

The first situation was detected in ditch 1 (Mata et al., 2011), dated from de second half of the 3rd millennium BC. A schist idol, with lateral cuts, was found deposited just at the bottom of the ditch, associated to a complete pot and some faunal remains. 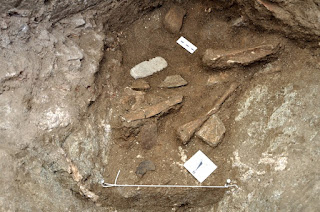 Idol in Ditch 1 (After Mata et al. 2011)
The second situation was recorded this year, in ditch 12, dated from Late Neolithic. An assemblage of 5 Almeriense Idols was recovered at the bottom of the ditch. I am just finishing a paper on this context that will be published next October. 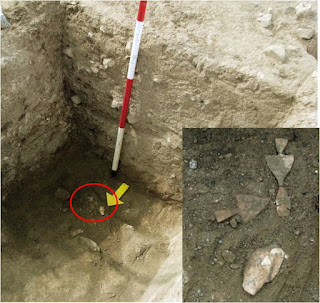 
These situations, although apart in time, document a same general fact: the filling of the ditches was, frequently, the result of intentional human action and they might document a ritualization of the beginning of those processes. Unless we admit they were just lost by someone passing by.


More and more evidences are appearing every year to create problems to the “erosion” and “garbage” explanations of ditch fillings and to support other interpretations that take into account human activity and intentionality. 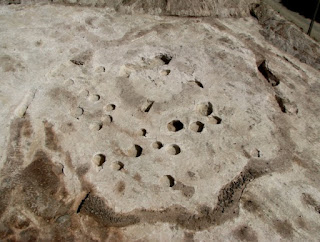 
The archaeological materials, namely the pottery, already suggested that this enclosure would be a later one in the context of Iberian ditched enclosures (see post 96).


Radiocabon recently confirmed that idea, by putting the ditches in the last three hundred years of the 3rd millennium BC.


But there are earlier pits and pits later than this time span, so the enclosure was added to an already existing site and pits continued to be built after the ditches were filled.


And not far (less than a kilometre to East and to West), necropolis of hipogea from Late Neolithic and Bronze Age were detected and excavated.
Publicada por A.C.Valera em 5:55 PM No comments: