This is an interesting perspective into ditched enclosures building procedures: the possibility that a ditch is not done in a row, but is a result of several modules, parts, that are added. The enclosure is a result of a process. The result is a sequence of overlapped (or almost overlapped) sections of short ditches, frequently with different dimensions.

I argue about this possibility recently, in two papers (Valera & Becker, 2011; Valera, in press). My first contact with the idea was in a paper on Herhxeim enclosures (a Neolithic LBK site), where human bones were scattered inside overlapping sections of ditches that, at the end, defined an enclosure. Then I read a short sentence in a blog from Manuel Calado and the excavations he did in Salgada (Borba, Alentejo), where he spoke of a similar situation (only with no human bones). I even did a post on that issue (see here).
Then I recall the thesis of Pedro Diaz del Rio (2008) about the building process of some walled enclosures: the possibility that walls in sites such as Los Millares or Castanheiro do Vento might have been built in modules; as independent, but converging, projects develop through time as a metaphor of a trans equalitarian social organization, still far from coercive and well stratified social relations.

When the geophysical image of Xancra came out of the magical machine of Helmut Becker, it became clear to me that we might be in presence of a similar situation of a ditch built through the adding of modules. This is quite clear in the outside ditch of Xancra, as I point it out in the paper (Valera & Becker, 2011). 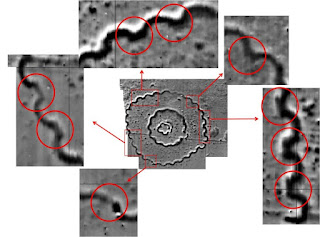 The highlights show areas where parts of the ditch seam to “join” or “overlap”.

Well, the enclosure under excavation by Era in Alentejo is confirming this situation. In the external ditch we are documenting sections, with different depths and widths, that are overlapping showing, with no doubt,  that the final enclosure is the result of a sequence of additions of ditch sections with different dimensions and made in different moments in time. The building of this outside enclosure was a long process. It was not made at once. And, naturally, it was not for defence or drainage. 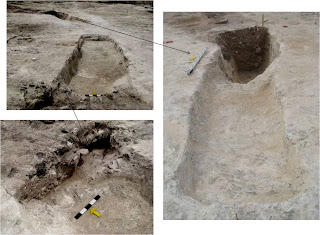 Here is a gate. In both sides there is a section of the ditch that is not very deep. Then, in both sides, two new sections were made, more deep and  large, cutting the previous sections. It is clear the semi circular joining of the different sections. 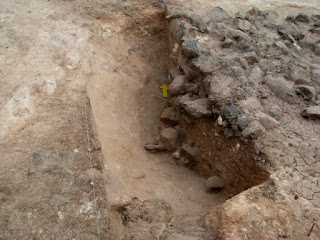 Here is another overlap: the left part of the ditched, already filled, was excavated in a slide way and the new section filled with a different sequence of depositions. 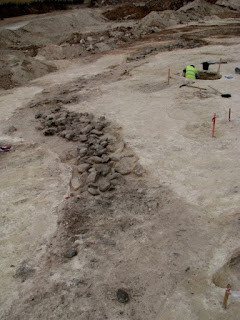 ﻿
Here we can see the top of the sinuous path of the outside ditch. It is quite clear that there is a part with top stones, then a section almost without stones, and then again a new section with stones (that ends at the cut present in the previous image). Even at the top filling this sectioning of the ditch is visible.

I wonder when the traditional discourse, that sees fortified settlements in all these sites, will get in time with the actual empirical evidence.

Ah! Yes, I almost forgot: there are funerary contexts inside. 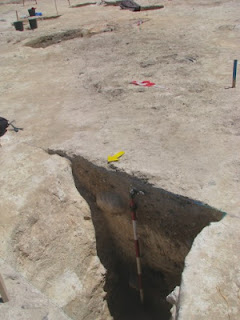 The inner ditch﻿ of the enclosure in excavation process: 1,5m deep in first plan survey (back of the dich); 1,3m deep in the next one; 0,8 at the gate. Notice the presence of a layer of geological material at middle depth.


The irregularity of ditches, not in plan, but in depth, is another issue that is very important to question functionality and meaning.

It is expectable that a ditch to accomplish the function of defence or infrastructure of a palisade presents a general regularity in terms of depth. The problem is that for almost all Portuguese ditched enclosures only small parts of ditches were surveyed. But recently to exceptions to this “rule” allow treating this problem.

At Senhora da Alegria, a small enclosure (about 10 meters diameter) at the top of the site presented a circular plan with one gate and only a pit inside. The pit had inside large fragments of burned wood and the ditch revealed a interesting depth profile: it grows deeper from the back towards the gate, with a significant slide percentage.

At the enclosure in process of excavation in Alentejo the inside ditch presents a similar size and also just one gate. But the depth of the ditch reveals the opposite behaviour: it grows deeper from the gate sides to the back: 0.8 / 0.4 at both sides of the gate and 1,5 at the back of the circle. So it presents also a significant slide. Inside, also just one pit, still in excavation (sealed with stones and with complete pots underneath).

What the strange behaviour of the depth of these ditches suggests is that they cannot be associated to any kind of palisade or regular barrier: were they built to be walked inside, from the surface to a deeper area? It has something to do with water circulation and accumulation in a specific area of the ditch? I recall that at least one of the ditches of the enclosure of Águas Frias the structure also ended in a sort of ramp. Let us see what this new enclosure has to reveal in the next days. For the moment the fillings of the ditches are as heterogeneous as their depths. 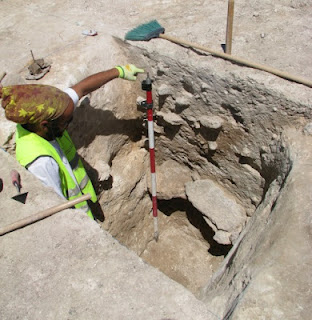 The back of the ditch: note the absence of geological material layer just one meter away from the other profile.﻿
Publicada por A.C.Valera em 4:22 PM No comments: 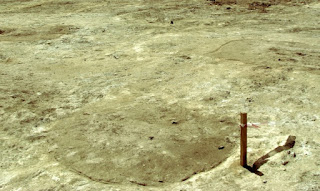 Pit in front of one gate in the external ditch﻿


The number of ditched enclosures keeps on growing in Portugal, as to be expected if we take into account what has been changing in Portuguese Recent Prehistory in the last few years. A new double ditched enclosure, dated from Chalcolithic, is under excavation in South Portugal.
It is a promising site to question and answer some of the issues “on the table” about this kind of sites.
Publicada por A.C.Valera em 9:01 AM No comments: 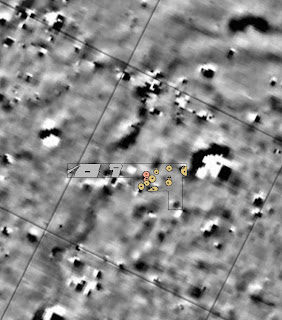 This is the geophysical image (by Helmut Becker) of a part of the double wavy ditches (3 and 4) of Perdigões and the surveyed area of Sector I (with the two ditches excavated areas and some excavated pits). The ditches are just 2,5 meters apart, but the inner one is slightly latter than the outside one (radiocarbon dating shows this). They decided to open a new ditch, just two and a half meters inside the previous one that was only half filled with horizontal deposits of stones, shards of pottery, faunal remains and some human bones. It would be easier to re-excavate the previous ditch. But they didn’t. It seems that they decided to open a new one, wavy, parallel and very near to the one already existing in that area (to be filled in a similar way). Once more, the traditional functional and economical logic fails here.
Publicada por A.C.Valera em 7:55 PM No comments: