0137 – Enclosing is also "protecting" the outside

This is an approach that hasn’t have the sufficient attention by the approaches to Iberian (and in the case of this blog, Portuguese) ditched enclosures.


The term enclosure tends to compel the idea of keeping something protected, saved, restricted inside a boundary. This perception became almost an axiomatic approach to enclosures. By default, when we see a boundary, we tend to assume that someone is trying to protect something inside from dangers or practices from outside.


Well, Richard Bradley came out with an interesting perspective to British henges. This kind of enclosures have an inside ditched surrounded by an outside bank. Bradley noticed the inversion of the “defensive” strategy: the bank, that should be inside of the ditch to defend the inside space, was, in fact, outside the ditch. He, then, suggests that henges are not trying to keep something out, but trying to keep something in. Whatever was occurring there, was supposed to be restrain in that inner space and not affect the wider outside.


This is an interesting perspective to apply to Portuguese ditched enclosures, although they differ a lot from the British henges.


Let’s look at the image of Xancra, for instance. The small inside enclosure, except for a possible central pit, seems to be clean. In the middle enclosures we have already several pits, especially four big ones that seem to form a square.  And in the outside enclosure there is an amount of pits. This suggests that enclosures have a double function: preserve some things inside and keep others outside. 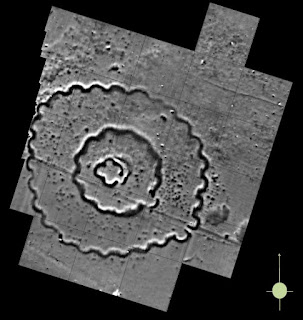 But usually we tend to look at this and value more the idea of preservation inside as a protection of what happens there. But the inversion of this way of reasoning alert us to the possibility that the purpose could be to keep something restricted inside, kipping the outside free from it.


Let’s think about the actual cemetery walls. Who do they protect?  Those inside or those outside?


This perspective about British henges has a lot of potential and should be added to the inquiry and to the hermeneutic tools we use to deal with the phenomenon of enclosures in Iberia in general, and to some of those enclosures in particular.
Publicada por A.C.Valera em 10:27 PM