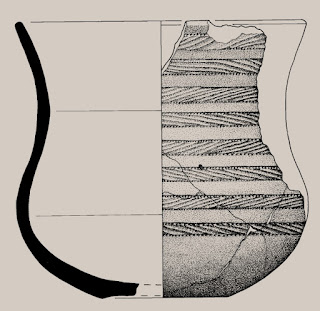 This is an interesting relation to analyze. At the moment the situation is the following one.
In Portugal the smaller ditched enclosures usually don’t have bell beakers (a difference regarding the walled ones). Only the larger enclosures raveled the presence of this type of pottery. This is the case of Perdigões, Porto Torrão and even Alcalar (with an AOC fragment). In all the rest, beakers are still to be recorded. But even this statement has its exception: at Bela Vista 5 we have a “Ferradeira” grave inside the ditches, and even if this kind of assemblage is not exactly a classic beaker one, it shared enough characteristics to be considered a specific expression of the beaker phenomena.

But apart from this, the present rule is that, in ditched enclosures, decorated Bell Beaker pottery is absent except from the larger ones, where can be very well represented, as it happens in Porto Torrão.

In the large enclosures, however, we have them all. In Porto Torrão, in Perdigões, but also in the near Spanish ones, like Pijotilla.

What does this exactly means?

Some written opinions about Iberian ditched enclosures support the idea that they were no longer built during the late third millennium. But the data is say otherwise.  Not just Bela Vista 5 was built in the last quarter of that millennia (although it is a “Ferradeira” context), but ditch two of Porto Torrão has beaker pottery in the lower layers and the outside ditch of Perdigões is dated from the third quarter of the millennia, clearly in a beaker phase, and have some beaker pottery in its upper half stratigraphy. So, in beaker times some ditches in large complex enclosures might have been opened and were surly active during the second half of the millennia. It is not like the reoccupations of abandoned chalcolithic sites in ruins, like it happens in the walled enclosures of Monte do Tosco or Porto das Carretas, where the walls were not rebuilt, only stone huts were raised and the area reoccupied is much smaller. On the contrary, something was happening in these large enclosures that show they continued active with the same general social meaning during the Late Chalcolithic. That is exactly what we can see at Perdigões, with the outside ditch being dated from this period but respecting the order of the previous enclosures and the organization of space and landscape, reusing older tombs with similar procedures and occupying (and respecting) the amphitheatre were the site was meant to be.

But this is based on the data we have at the moment. And, as recent times have been showing, everything can change in a “blink of an eye” in Alentejo.