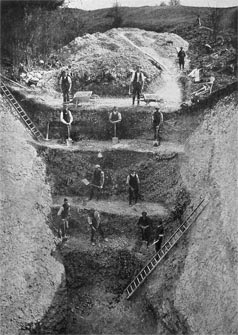 
Evaluating the effort of digging ditches and of building ditched enclosures is not just a question of measure the amount of rock and earth excavated and moved. That is just part of the equation. Other important parts are the number of people involved and the duration of the building activities. As noticed by me and others, great building enterprises are available to small communities if they are done by stages in time and if they can congregate the will of the community. And it is in that will that I want to focus today.

Functionalist approaches naturally focus on function. No problem with that. The thing is that they focus in the function of the structure once it is built, and pay no attention to the function of the building process, which is an important social one.

For some decades now, some have argued for the need to focus on the social importance of the act of building. An act that goes much further than the pretended function of the feature itself. We have innumerous examples from all over the world and from different historical periods. Let me just give one example that I think is known to everyone: when Amish are reunited to build a barn for one member of the community, they are not simply building a barn to perform the function of storing the crops. They are doing something that touches deeply the identity of the community and reinforces their world vision, their social, political and religious bonds. As Marcel Mauss reminds us in his essay about the gift in polonaise societies, this facts that we study (in this case building activities) “are all total social facts, for they put in movement the totality of the society and its institutions or just an enormous number of those institutions, in particular when interactions were related to individuals. All these phenomena are simultaneously juridical, economical, religious, esthetical, morphological, etc.”

That is why some decades ago Evens argued that the process of building an enclosure had its main focus on the build process. For a functionalist mind focus on the subsequent utility of the thing, this might be hard to understand. But in many societies, inclusive in ours, many creations culminates in the very act of creation. Christ, we are leaving the times of the ephemeral.

And yet, it seems so difficult for some, today, to conceive that huge building enterprises might have had their basic motivations in the very act of building, in an ephemeral use and in the subsequent condemnation and in its social and ideological implications.

To evaluate the effort of building ditched enclosures in Prehistory it is important to go further than impressive metrics and politics of coercion.
Publicada por A.C.Valera em 8:16 PM