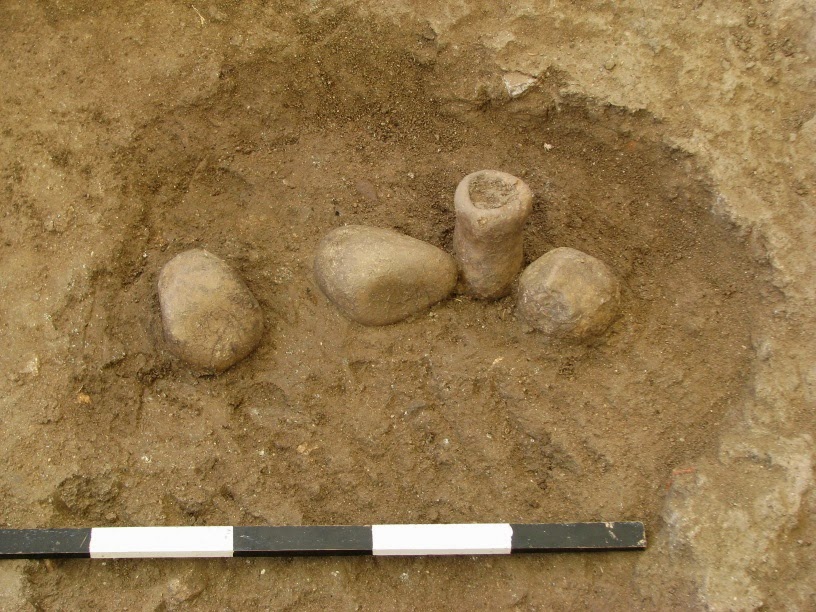 Is something that it is obvious in many situations and less in others. The difficulties of recognition are basically related to the fact that the logic presiding to the depositions has to be accessible by our own rationality. But different criteria and different categories of organizing the world do not make the task an ease one. Meaning is hard to establish, particularly in Prehistoric archaeology. So, many just argue that we should not attempt to interpret, while more or less inadvertently keep projecting familiar meanings into past contexts.

But, in fact, sometimes it is undeniable that there was an intention of communicating an idea or to practice an action expected to interfere with the course of events. That is the case of a particular deposition inside ditch 3 of Perdigões enclosure.

A tubular ceramic object, usually associated to the practice of copper metallurgy (used to introduce air into the ovens to arouse the fire), was deposited standing between two river pebbles. The composition, we might argue, corresponds to a phallic representation and suggests an association between masculinity (expressed by the phallus) and metallurgy (expressed by that specific object and its specific use in kipping and renewing the fire).

This is just one more specifically symbolic expression that was recorded inside a ditch in Perdigões. An intentional deposition easily recognizable by our categorization patterns. Others, however, are not so easily recognized by present perceptions and tend to be relegated to the “trash can”.
Publicada por A.C.Valera em 8:55 PM