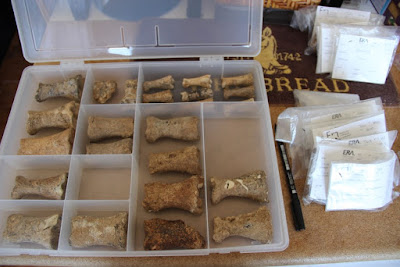 During the coming summer solstice (not exactly, but in Sunday) the Era team will be observing the sun rise in the alignment of gate 1 again at Perdigões. During Saturday we will be at Esporão farm to guide visitors (of the Big Day event) to the exhibition of Perdigões in the medieval tower of the farm and to the deposit of materials.
I am using part of today’s holyday to prepare some materials to be shown in the deposit. Taking the phalanx idols form the plastic bags and arrange then in a box, so they can be easily appreciated.
And when I was doing this I noticed the similarity between the fracture in a phalanx collected at the surface of tomb 2 and another fragment collected at the surface of tomb 3, recently excavated and just 10 meters away.
They fit. They were both considered as different elements in my paper about the phalanx idols of Perdigões (the drawing of the top part was even presented). Now that they are reunited a new object emerged: the zig-zag hair in the back (although horizontal and not vertical like the other peace from tomb 2 – see publication) and the eyes and the arms (possibly holding something) in the front. Very similar to the other one already published, but with arms. It needs to be better cleaned now. 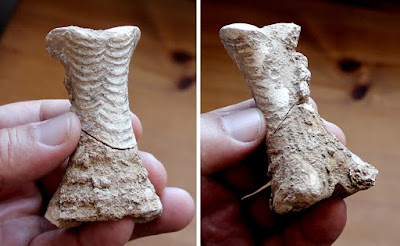 I always argued that keeping things in site has its benefits for trained visual memories.


The paper (see here), that addressed the phalanges but also the horse domestication problem, can now be updated. Well, not entirely: there are some more new phalanges from recent excavations that enlarge the already impressive numbers of these items at Perdigões enclosure.
Publicada por A.C.Valera em 2:04 PM