The enclosure of Nobre 2 was discovered in Google Earth and published by me and Tiago do Pereiro in 2013 (Valera, Pereiro, 2013). It was recently affected by agriculture, as reported in the previous post. Here is a new aerial image of the enclosure (from EDIA), where the ditches are must more clear and we can perceive an alignment of three gates orientated at 140º. It might be  very similar to Xancra and to the recently prospected Borralhos.
It is important to do, at least, some geophysics there before the plantation. 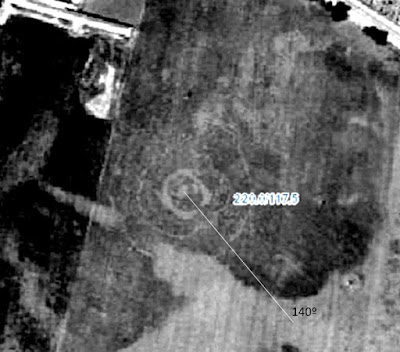