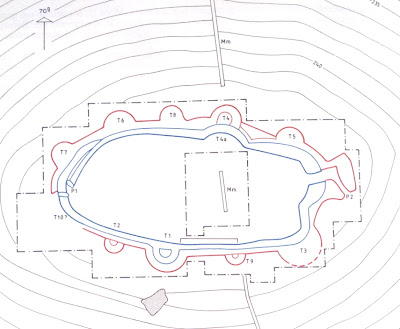 Excavated during the late seventies and the eighties of the XX century, Santa Justa is a small walled enclosure located on a hilltop. Presenting a general ellipsoidal plan, it roughly measures 20m by 30 m.

Initially, it was an enclosure with to opposite gates, located in the extreme tops of the ellipse. Then, several phases of construction were detected, providing the structures of bastions, wall reinforcements and the closing of one gate and strengthening of the other.

Structures interpreted as huts were detected inside, but also outside the walls.

Metallurgic activities were detected inside and, because of the size, the site was interpreted as a “fortified farm” of farmers and metallurgists of the 3rd millennium BC.

Recently, in a materialistic approach (Morán e Parreira, 2009), the site was seen as a response to a need of protection of an elite interests and products. This elite would control through ideological coercion, and not through violence (the solution that historical materialism found to deal with symbolism), the common people of the community and would present itself as an assurance of social stability. In this context of power display, the walled enclosures such as Santa Justa would, not just reinforce, but also symbolically express that political power and prestige.

Santa Justa became one example of what historical materialistic approach calls “symbolic euphemism”: control, not through direct coercion, but through ideological persuasion and deception. Every symbolic meaning is at the service of a social strategy of power to sustain social inequality.

A theoretical elaboration that, somehow, seems to rises above the available empirical data.