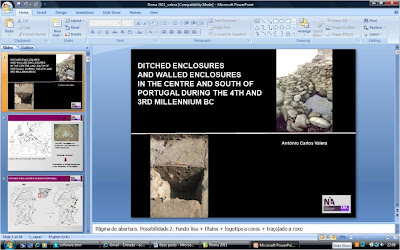 The research of Portuguese enclosures was represented at the conference STRATEGIE INSEDIATIVE E METALLURGIA. I RAPPORTI TRA ITALIA E LA PENISOLA IBERICA NEL PRIMO CALCOLITICO ,promoted by the German Archaeological Institute, through a presentation made by me (representing NIA-ERA), comparing walled and ditched enclosures and proposing a general different social role for those architectures in the South of Portugal, by a presentation of Rui Parreira and Elena Morán of the ditched enclosure of Alcalar and its regional context from a materialistic point of view, and by a presentation of Michael Kunst about the research on Zambujal.

If the apparent antiquity of the emergency of metallurgy in North Italy was one of the main debated issues, the absent or reduced number of enclosures (walled or ditched) in that region was also a striking surprise when comparing to Iberian dynamics, where metallurgy occurred at least a millennium later.

One thing, though, seems to be shared by both regions: the emergency of metallurgy is not particularly linked to the development of enclosure architectures, for in Iberia enclosures appear before metallurgy, and in Italy metallurgy developed with no connection to enclosures.

Food for thought about the social role of both archaeological realities.
Publicada por A.C.Valera em 10:11 PM