Ditch 8 of Perdigões is a good example of these two circumstances.

First let’s look to what we find inside the ditch. The top of the ditch filling was exposed in a 12m area. It showed a deposit covered by a central concentration of fragments of pottery. Removed that first layer of pottery another one appeared. Just like ditch 12, Late Neolithic ditch 8 had its top filling layers incorporating an “avenue” of pottery shards (Figure 1). 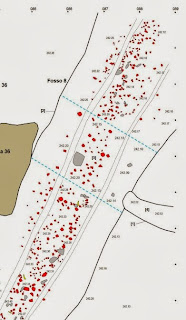 But the section that we have done in the ditch showed that this horizontal depositions of pottery, stones and faunal remains continue in depth. If we look to the plans of this section (figure 2) we will see that there are layers of depositions of those material intermediating with layers of just earth, until the bottom part of the ditch, where this kind of depositions became continuous. 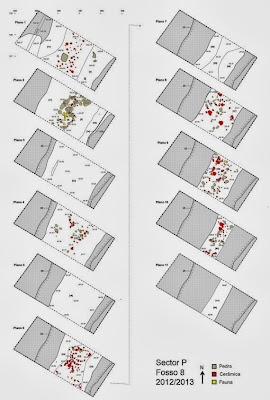 The sections of a 1,5m deep ditch and the definition of the top layers of pottery depositions took us two campaigns (one month each) to achieve.

The second issue that I want to address is: why this kind of depositions are not occurring in other ditch enclosures excavated in Portugal? Are they a particularity of Perdigões? Perhaps they are. But one thing I am convinced: the actual practices of excavations in rescue archaeology would not be able to detect these depositions. When you have to excavate a ditch and get paid 55€ a square meter (independently of the depth), then you have to be satisfied if a rough image of the stratigraphy is obtained. Archaeology of negative structures is progressively becoming the activity of quickly emptying pits and ditches.

So what empirical record will we have to deal with in our debates, theoretical hypothesis and social-historical problems? What is being rescued? Does it worth what it costs?