In the centre of Perdigões ditched enclosure there are contexts of depositions of human cremated remains dated from the middle of the 3rd millennium with no parallel in Iberia. Those remains were transported in large pots and deposited in pits. Some of the pots were broken in situ inside the pits with the humans remains. For others, small pits were opened for receiving the broken shards of these pots. That is the case of Pit 91, that received part of a big pot and a pile of shards of another bigger one. The shards were deposited in a pile and slide down, as their removing sequence shows. In the involving sediments some few human burned bones and a burned arrow head were collected (they were probably attached to the pot's walls).
This is not a funerary pit, but a pit related to the ritual (involving the braking of the transportation pots) performed in that area regarding the human cremated remains. 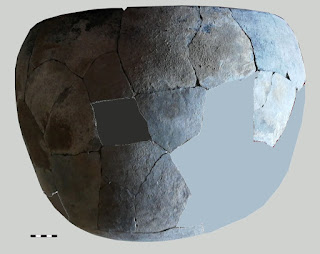 Removing the shards in their stratigraphic sequence: