Senhora da Alegria is a surprising and important site, by the combination of its location, structures and chronologies.

A sequence of occupations dating from Early Neolithic (with “cardial” decorated pottery) to Late Neolithic is being excavated by the Omniknos company (scientific coordination of António Valera and field direction of Tiago do Pereiro and Rui Ramos) in a context of archaeological emergency intervention.

The site presents several ditches, some of them probably corresponding to palisades, that form more than one enclosure, with several moments of construction with structures cutting other structures.

One of the ditches of the eastern side of the site.

Those ditches cut previous early Neolithic layers and some of them may be also from the same period and others from a middle Neolithic phase. These ditches are then covered by layers with positive stone structures, dating from middle/late Neolithic. 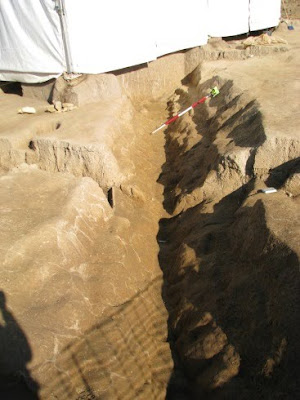 One of the ditches of the western side of the site, going under Late Neolithic layers.

It is, therefore, the earliest site with this kind of structures known in Portugal (and in this area of Portugal), revealing that also in western Iberia this architectures are present at the early stages of the Neolithic (as was already documented in eastern Iberia).

But it also present one (at the moment) rectangular house. Rectangular Neolithic houses are quite rare in Western Europe. In Portugal, for the recently excavated and published site of Castelo Belinho in Algarve (by Mário Varela Gomes), post holes were argued to be evidences of the presence of rectangular houses. Nevertheless, some scepticism has been revealed by some scholars relating those interpretations, because of the large and scattered number of post holes. But at the present site the image of the structure is striking and leaves no doubts: a sub-rectangular house (with slightly rounded corners), with central posts aligned with the entrance (facing east), with 10,5 x 5,5 meters. 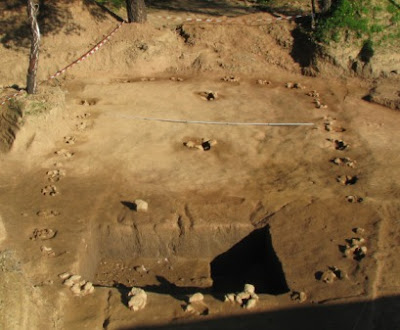 One of the post holes of the entrance (left) and one of the central ones, reaveling two construction moments (right) .

So, this archaeological context also presents for the first time in Iberia the “association” of rectangular houses with ditches at a same site and gives strength to the interpretations developed for the Algarve’s site. 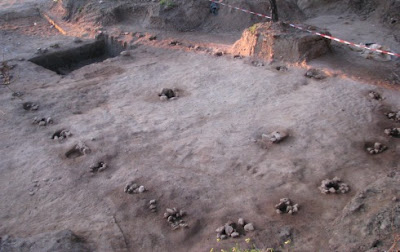 Located at in a hinterland transitional point, this site is already fundamental to the research of Neolithic process of West Iberia, to the emerging of the surrounding megalithism (and the Beira Alta one) and to the problems concerning the appearance of ditches/palisades enclosure architectures in the peninsula.