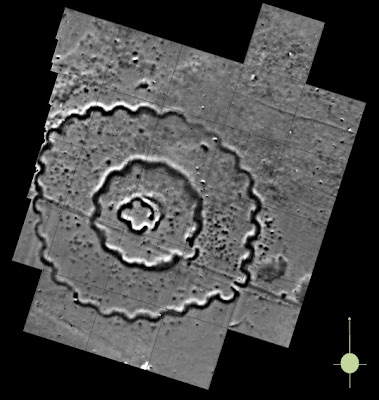 Some Portuguese enclosures present designs that have patterns that are visually striking from above and as a whole (from an aerial picture or geophysics image, for instance). Just like, with the natural differences, the Nasca “land drawings”. But their builders and users didn´t saw those images (well, there is the question of the possible balloons in Nasca).

Could sites like Xancra, Santa Vitória, Outeiro Alto 2, Monte do Olival or Perdigões not have a previous and spread mental image that the architecture was reproducing? In fact, we have the metal capacity of imagining and visually conceive what we actually cannot see. We built mental maps, for instance, and we can build mental plans, even without flying or drawing.

So, how really were perceived these enclosures in terms of their plans and designs? Could this perception of Xancra ever been formed in the mind of one of its builders or visitors?
Publicada por A.C.Valera em 9:32 PM