Two possible ditched enclosures detected earlier in Google Earth were confirmed in the field, together with a recent find from last week (also on satellite image). The first two are from Serpa municipality and the third from Beja, just 3,3 kilometers away from Monte das Cabeceiras 2 (which is 3,5 from Salvada). 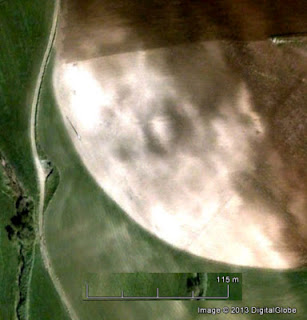 The new site in Beja municipality: grid stones and Chalcolithic pottery were visible at the surface.

These new enclosures present a similar topographic location, on the top of smooth hills with a great visibility over the landscape, almost in all directions. But at least two of them do not have its centre in the highest point of the hill, but slightly in the beginning of one of the slopes.