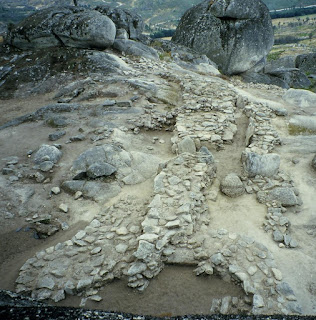 Each enclosure had a gate, built with lateral vertical granitic slabs and a horizontal threshold in the middle of the entrance. In the gate of the inner enclosure, the threshold slab presents a sequence of nine carved cup marks. Five of them form a circle, three make an curve over the circle and one is isolated. 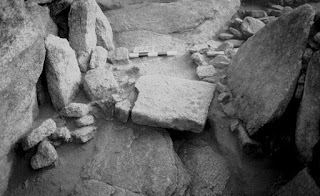 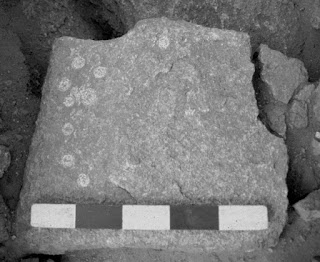 Quite frequent in the south, these engraving are less common in the region of central Portugal hinterland. They cover a wide chronology and there are several interpretative proposals for their meaning. They are highly speculative, but in general they assume a symbolic role for these cup marks. In the present case, their location in a gate doorstep is particularly relevant, since gates always tend to have a symbolic status related to its role of connecting different significant spaces, of transition between the inside and the outside and their specific meanings. Would these marks helped to create a change of state in who passed through that gate? Would they protect the gate? Would they give some sort of warning? Would they represent something real (for instance a constellation of stars) or just an idea or superstition? And why were they carved in the inner gate and not in the outside one (that is quite similar and also have a doorstep slab)? And why in this specific enclosure?
Publicada por A.C.Valera em 10:46 PM