It is a fact that a significant number of walled and ditched enclosures have plans that tend to circularity and that angles are rare. Well, if this statement is a rule for ditched enclosures, for walled ones it has some exceptions.

In fact, there are some walled enclosures that present designs made by strait sections of walls that connect forming open angles, where we usually find circular constructions that in Portuguese archaeological literature are immediately interpreted as bastions or towers.

One of the classic sites is Pedra do Ouro (Lisbon district) walled enclosure. But more recently, walled enclosures with a polygonal tendency have been recorded in Alentejo, namely Porto das Carretas in Mourão municipality and São Pedro in Redondo Municipality, following designs also suggested in some sites of south Spain, like Cerro de los Vientos de La Zarcita or Campos.

This rupture with circularity is also seen in some French walled enclosures, like Boussargues. But here some new perspectives were developed that I think it would be interesting for Iberian archaeologist to consider and some Spanish colleagues have done just so (inclusively for the well known forts of Los Millares). At Boussargues, the round structures at the angles of the walls were taken as previous constructions. It was later, in a second phase of construction, that they were united by sections of strait walls (Colomer, et al. 1990), like dots united by lines in a paper. In this case, the strait design of the walls seems to be induced by the previous circular structures (that are not bastions or towers, but households), generating a more polygonal shape. This is a quite different process from building an enclosure that was planned ahead and it raises a lot of questions about the way some archaeological structures have been interpreted in Iberia. 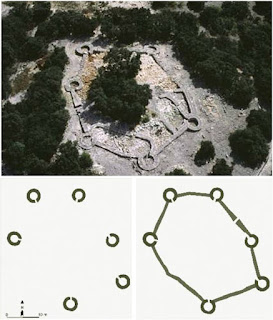 If we look to the published plans of Porto das Carretas and São Pedro we can see that in several situations the areas of the angles and the connections to the so called bastions or towers are quite destroyed. Sometimes stratigraphic relations between the structures cannot be observed and interpretation is relying on presumptions.

Well, it seems that examples like Boussargues were not taken in consideration in the interpretation of similar Portuguese enclosures. But I think it would be useful to approach the records of this sites (Porto das Carretas and São Pedro are no longer physically available for research, as we all know, so we only rely on the records of the excavations) with this perspective and question them free from some prejudices.