Well known in Europe, wood heges seem to be missing in Iberia. But just like ditched enclosures some years ago, I believe this is just a problem of research rather than a real circumstance.

A couple of years ago I came across with a context in Beira Alta (Central Portugal) in the Quinta da Assentada site that had a sequence of post holes and small ditches with several directions, sometimes cutting each other. This was overlapped by another sequence of alignments of rectangular pits. Unfortunately, the extent of the excavations didn´t allow a full comprehension of the plans suggested by those structures, but an essay of the eventual type of super structures was attempted. 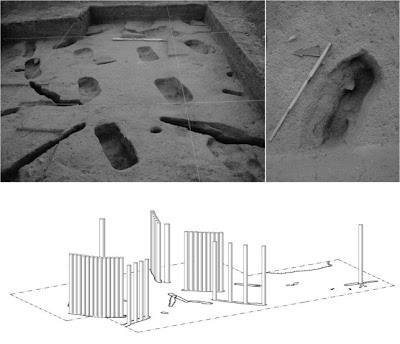 Quinta da Assentada. View of the several small ditches and post holes, inclusively inside the ditches, and possible reconstitution (Valera, 2007)

More recently, the geophysical research done in several ditched enclosures and the reinterpretation of a excavated context, seem to reveal the presence of circular timber henges. This can be seen at Moreiros 2 and Outeiro Alto 2. In the later a possible wood henge was surrounded by three funerary hypogea and a pit grave. This context and interpretation will soon be published. 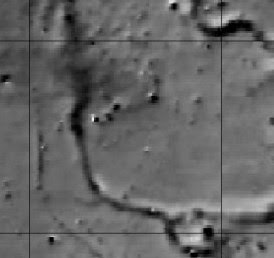 Circle of large post holes of a possible henge. The pits are equal to the ones that can be seen in the alignment of a possible palisade at the left, in Moreiros 2 (Becker, Valera & Boaventura, in print).

In fact, more situations like those will exist, but they can only be detected with open area excavation or good geophysics (and, of course, with a mind open to this possibility).

Becker, H., Valera, A.C. and Boaventura, R. (in print), “Moreiros 2 (Arronches, Évora): magnetometry of a complex ditch and palisade enclosure”, poster to be presented at the IXIberian Congress of Archaeometry, Lisbon, 2011.