As I have put it several times, heritage only exists when is socially activated and lived. Archaeology, like other sciences in general, has its social justification in the social recurrence that provides.

Prehistoric enclosures have a double emblematic role in this issue. In one hand they are a kind of heritage that needs to be known, comprehended and valued by people, as a main archaeological phenomenology to understand prehistoric communities of Neolithic and Chalcolithic. Second, as so many of them did in the past, they can be used to bring people together, generating aggregation, reinforcing identities and a general common sense of heritage preservation and recognition of its social values and roles.

This happed last Saturday at the walled enclosure of Fraga da Pena (Fornos de Algodres) for the 3rd time in six years. 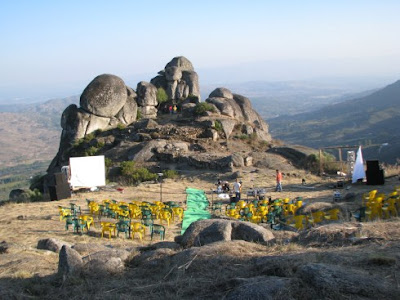 As the scientific research saw it, this huge and magnificent granitic tor must have had stories, myths, associated to its existent and majestic domain over the local landscape. When the two walled enclosure were built, some 4200 years ago, this was already a “place”: a local with a name and a history (not a modern geological one, but a mythological one), part of the local landscape semantics.

How to pass this view of a group of rocks and stone walls to common rural local people and general public? 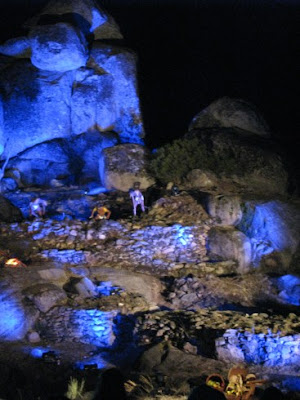 In the absence of a real one, a legend was created and published in 2005, using other local myths and the scientific discourse displayed about the site. The legend, in a more pleasant way, makes people understand that this was a special place for special social practices and important for past world views. 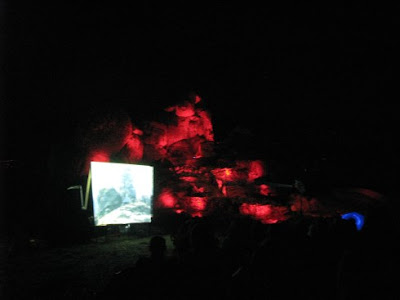 In that year the legend was theatrically played at Fraga da Pena, for local community. Last Saturday another show based on it was performed there, bringing more than 300 persons to the place and, in a way, restoring its earliest social function: aggregating people in social practices that reinforce identities and a sense of territoriality, developing a consciousness of common memories and senses of belonging and, in summary, making heritage doing its job.
Publicada por A.C.Valera em 3:36 PM