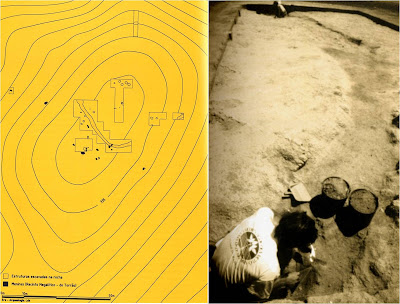 Plan of Torrão and view of the ditch, after Lago & Albergaria, 2001)

Located in a small hill, Torrão revealed a little ditched enclosure. Excavated in a part of the ditch's route, it has apparently an ellipsoidal or oval shape, with a maximum length of about 50 meters.

The ditch is also small. With a general profile in a “V” shape, it has 1,5 meters wide and 1 meter deep. Inside and outside, pits were detected and excavated, revealing deposits with pottery, grinding stones and some lithic materials. Practically nothing was detected outside te negative structures.

But another interesting circumstance of Torrão is the fact that the enclosure is not exactly at the top of the hill. In fact, it only occupies the NE half of hilltop and the beginning of the slope in that side, sharing the other half with a (previous?) cromlech of also small menhirs. This cromlech was already very destroyed, but the distribution of the monoliths shows that both enclosures didn’t overlapped, a circumstance that could reflect, if not a contemporaneous function, knowledge and a respect for previous symbolic structures. In this context, it is also meaningful the proximity of a small (again) megalithic tomb (proto megalithic by Portuguese typological standards), located just some tens of meters way, in a lower platform of the hill.

Ten years ago, in Portugal, ditched enclosures were steel just settlements. It was in that context that Torrão was first published. But the evident proximity and relation to megalithic structures led the authors to consider the importance of symbolic meanings and ritual practices as main questions to put to the site in future research. Identity and ancestors were issues that emerged in the text at the end.

Today, facing the recent data and the different theoretical approaches, Torrão is a striking example of the limitations (not to say inaccuracy) of the undemanding interpretation of a significant number of these complex sites as simple fortified settlements (in a village sense).
Publicada por A.C.Valera em 6:55 PM