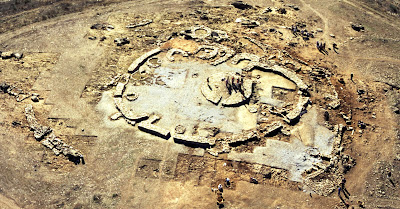 This walled enclosure, located in a hill top, was used as an instrument for a theoretical drift and for one of the first attempts (if not the first) to introduce a post processual approach in Portuguese Recent Prehistory and in the problematic of enclosures.

As the author puts it: “At first was interpreted along classic lines, as a fortified settlement (...).” (Jorge, 2002a, quoting Jorge, 1993). The next years would be of reinterpretation, questioning the traditional notion of fortified settlement and creating the notion of monuments for these kind of sites. Discussing the arguments, the empirical evidence, the theoretical coherence and fragilities of the framework or the academic contextual environment of this change, all of this would be too much for just a post in a blog. I will be doing it in future posts, as time goes by.

And analyse the consequences of this drift to the disciplinary debate would be no lesser problem. It would be so, if a natural debate happened. But in general, everyone fortified in their one theoretical frameworks (inclusive the newcomers); debate was avoided and substituted by sarcastic comments or back stage gossip; students were (and still are) formatted in the axioms of each “school” and invited to avoided heretical thoughts or practices.

In fact, if the new approach to enclosures, through a clear Anglo Saxon influence, tend to present them as places of social aggregation and identity management, as places intended to bring people together for social interaction, what happen in their contexts of research was a “theoretical fortification” of the different research schools. They enclosed themselves as “real” fortified settlements”, with purpose of defence and control (of their territory and respective inhabitants).

But as I recently put it, “Walls are built and walls fall down. For long, the approach to South Portugal Recent Prehistory was enclosed and protected from “wicked” European influences by high walls of strict empiricism or theoretical radicalism. Those walls stand, but they no longer enclose.”

As some other walled enclosures in the seventies and eighties, used to question cultural and diffusionists explanations in the light of functionalism and historical materialism, Castelo Velho was another milestone in the research of Portuguese enclosures. Not without “sin”, of course, for scientific practices are made by humans living in “sinful” human social contexts (and not by gods in Olympic laboratories).
Publicada por A.C.Valera em 10:35 PM