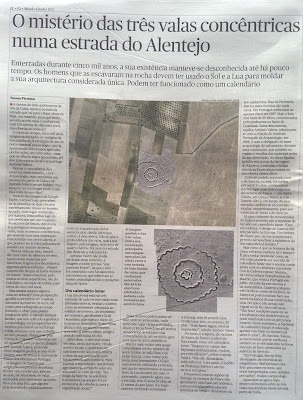 Although ditched enclosures are known for a long time in Europe, and in Portugal since the eighties of the XX century, the general Portuguese public ignores this kind of archaeological sites and their scientific and heritage importance. People know or heard of megalithic monuments, but they don´t have any awareness of enclosures, of their relations to megalithism, of the large sizes they may reach, of the complexity they may present, of the fascination they may have on us.
This is a problem at several levels. One of them, is that people don’t understand the need (and the costs) to preserve and study this kind of sites. They were not educated to value them, therefore they don´t value them.

So, it is the responsibility of any research project on the matter to assume its own publicity and to promote the disclosure of the produced knowledge. As someone once said, the goal of scientific knowledge is to become common sense. Only shared it gains its social relevance and be in a position to require for social value and support.

And ditched enclosures can provide us with a lot of important and attractive stories to tell about Prehistory and about ourselves. As they did in the past, they can help bringing people together around heritage value, especially in times of difficulties, where culture tends to be undervalued.
Publicada por A.C.Valera em 2:50 PM