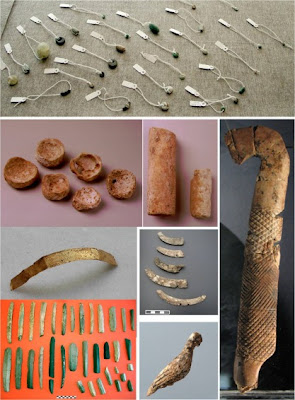 Some of the imported objects and raw materials at Perdigões enclosure: “green stone” beads; recipients and idols in limestone; gold; long blades of flint; objects in ivory.

One thing in common to the large ditched enclosures, but that seems to be less significant or totally absent in the smaller ones, is the present of a lot of exogenous raw materials and artefacts. In some cases, the local of origin can be traced back to far away regions.

At Perdigões set of enclosures, and in Chalcolithic times, we have elements coming from several regions of Spain, others from Portuguese Estremadura or Alentejo´s coast and even from North Africa, like the ivory from bush elephant.

This kind of objects are absent or extremely rare in the surrounding settlements, enclosed or not, revealing that the site locally catalyzed the relations with the outside. Those relations were probably not direct, especially with the far regions, but intermediated by others. Large enclosures, then, seem to play a leading role in inter regional interaction.

In fact, several archaeometric studies (of pottery, beads, metal, ivory) in course at Perdigões are being used to built an image of those interactions, identifying potential origin places and suggesting relations whit other large enclosures, like Pijotilla and San Blás, also in the Middle Guadiana basin, but in Spain.

But because things don´t move along by themselves and because of the fact that all of those large ditched enclosures were also places where funerary practices were intensively present, we are now starting to look into the human remains (through DNA and other methods, such as teeth morphology) hopping to go further in mapping those relations.

How to value this in terms of social organization? Well, we have a couple of models available in the theoretical market. But that is food for future posts.
Publicada por A.C.Valera em 8:11 PM