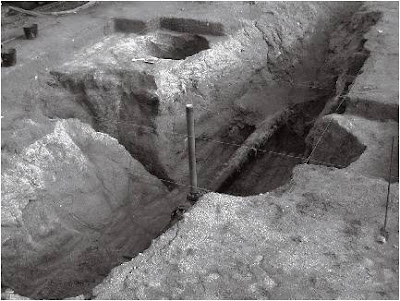 Horta do Albardão 3 is a recently detected enclosure defined by, at least, one ditch.
The ditch is 2,2 meters wide and 2 meters deep, with a section in a slightly asymmetric “V” with a strait base forming a rectangular segment, similar to ditch 4 of Perdigões. It was excavated by Arqueohoje Lda in the context of rescue Archaeology. As usual in Portugal, the excavation and research done was restricted to the affected area. So, just a very small section of the ditch was excavated and no further work was required to determine or infer the size or shape of the enclosure. Nevertheless, the segment excavated seems to indicate a sinuous smoothly wavy ditch, like the one of Perdigões and others.

In Iberia, the building of ditched enclosures seems to have stopped during the Chalcolitic, precisely during the second half of the 3rd millennium BC. Nevertheless, some evidences are slowly starting to appear, showing the presence of materials or specific contexts of Bronze Age in some of these sites. The same is happening in Perdigões and in Outeiro Alto 2. Except for the later, data is quite scarce yet to allow any consistent interpretation of those presences. But it is gradually becoming clear that at least some ditched enclosures, deactivated and “abandoned”, still mark the landscapes and the social memory with significant capacity of attracting the Bronze Age communities, namely to burying their death.

I called this circumstance a symbolic extend (Valera, 2003) that makes a site socially active after the abandonment related to its original context of function and meaning. A memory is not simply a passive bank of data, but one of the most active “tools” that frames human action. And sites like enclosures, ditched or walled, have the potential to be what the cognitive sciences call external memory and develop powerful means of attraction. I will be back to this issue.