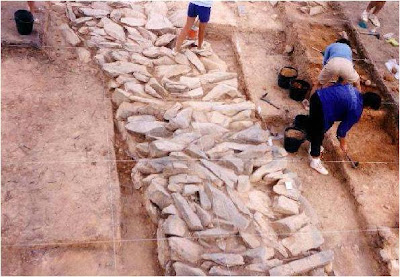 Many Portuguese chalcolithic walled enclosures are known only through small archaeological interventions and several of them were never conveniently published (a traditional problem of Portuguese archaeology). This is the case of Charneca do Fratel, where an excavation was conducted in 1987/88 and published in a short notice.

That note, now easy to obtain in the net, says that, after an occupation of Late Neolithic, a Chalcolithic walled enclosure was built in a restricted sector of the previous area of occupation. The wall is two meters thick and an entrance and circular bastion were identified. It had the base made of stones and the top is thought to be made of clay. A scattered megalithic necropolis around the site is referred and the site is relatively close to one of the greatest Portuguese rock art sanctuaries in open air in the valley of a large river (Tagus, in this case) and contemporaneous of some of the engravings. The enclosure is referred as an example of South Iberia chalcolithic systems of defense.

Charneca do Fratel is at north of the south Portugal hinterland concentration of enclosures, in a region where this kind of sites is rare (for the moment). Its potential is obvious by the short description (of the site and its archaeological context) and its location makes it even more interesting. Nevertheless, research seems to have stopped, maybe because the site was considered just another fortified settlement like so many others in Lisbon Peninsula or in the Southwest and Southeast Iberia, integrating a repeated general model of social organization. I think further research should be developed, perhaps with an approach that pays particular attention to the local landscape semantics. I suspect that is an entirely new discourse that can be written about this general context.
Publicada por A.C.Valera em 5:26 PM