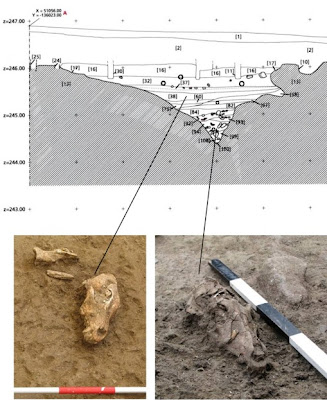 Dog skulls in Ditch 3 of Perdigões

Dog skulls in ditch 3 of Perdigões. This situation drives us to the classic problem of “is it ritual or rubbish? (Question asked by Hill, 1996). The question is, in fact, a version of the much larger problem of identifying and interpreting human intention in Archaeology (especially Prehistoric). The debate developed a concept, structured depositions, which have been used to fulfill the semantic emptiness that emerged with the criticism to the use of the modern notion of rubbish (a meaningless discard with no value and no importance).

The criticism lays in the perception that what is unsacred today and understood as waste and without value, could, in different social contexts, correspond to meaningful and symbolic actions. Therefore, we would be in presence of “structured depositions” and not chaotic and unorganized rubbish.

So, “structured depositions” emerge as a designation that “saves us” from precipitated projection of social practices anchored in modern systems of references, allowing the emergence of different intentions and different contextual social meanings.

Nevertheless, as Olsen (2000) puts it, the designation in itself doesn’t offer any explanations or interpretations regarding the nature of the depositions. Therefore, context and pattern play a decisive role in defining that nature and ultimately in distinguish rubbish from other intentional depositions.

And the context of this ditch in Perdigões is one of horizontal deposition of layers of stones, pottery shards, and faunal remains (but no other dog bones except from the skull parts). They are selected materials that are not representative of the totality of materials that circulate at the site at the time nor of dog skeleton. On the other hand, depositions of dog skulls (or heads) seem to define a practice all over Europe in the period. In Iberia, the case of Camino de las Yeseras (Liesau et al. 2008) is a reference: a ditch enclosure where in a pit several dog heads were deposited in a organized way after being cut off. In a lot of other places, the presence of dog remains corresponds only to parts of the skull (inclusively in Perdigões ditches 3 and 4): San Juan Ante Portam Latinam, Mas d’en Bixos, Pou Nou 2 and 3, Marroquiés Bajos, Picarcho, Quinta do Anjo or Alcalar 7.

And when is not the skull, are the paws in anatomical connection. In fact, the problem of structured depositions is quite linked to another one, and both should be address in the context of the same mental framework: the problem of body segmentation, shared by animal and human treatment of remains. Segmentation and valorisation of parts seems to have played an important role in the social fabrics of those societies. In fact, we are talking about segmentary societies. Segmentation is strategic and structural (Valera, 2010b). And ditch enclosures are a major context to address this problem.