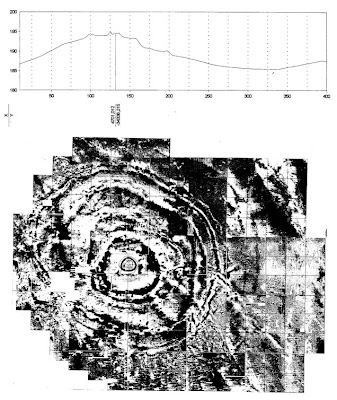 Monte da Ponte is one of the two chalcolithic enclosures known in Portugal that combine walled and ditched enclosures (the other is Salgada). This can be observed in the geophysical prospection image (obtained by Helmut Becker). In a small hill there are a set of several walled enclosures, some of them with bastions. In the beginning of the plain, a double circular ditched enclose the hill and its walls.

This circumstance has been used to argue in favour of a direct relationship between walled and ditched enclosures (an issue I’ll come back latter), but it is premature to assume that connection just based on a geophysical image. Facing the actual chronologies available for ditched enclosures in South Portugal, that go back to Late Neolithic (2nd half of the 4th millennium BC), we cannot assume a priori that ditches and walls are contemporaneous at Monte da Ponte. Furthermore, several occupations of a same site, separated by abandonment phases, don´t imply continuity of function and meaning, as can be seen and argued for quite a few other sites.

So, just like a lot of other complex and enduring enclosures (like Perdigões, for instance), we must put temporality in the different structures and establish their context before assume certain conclusions.
Publicada por A.C.Valera em 11:36 AM